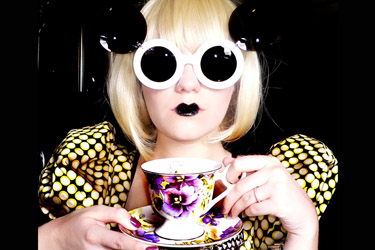 Nora Kobrenik was born in Odessa, Ukraine, and moved to United States when she was twelve. She has a B.A. in Fine Art from the School of Visual Arts, and received a Robert Mapplethorpe Foundation Award upon graduating for a body of work that “embodied originality and courage.€

Kobrenik works as a Visuals Coordinator at Uptempo Magazine, recruiting young and talented photographers for publication. She splits her time between Connecticut and New York City.

NK: Cindy Sherman. What inspired me most was her ability to transform herself into a completely different character photograph after photograph. I also found it fascinating that she almost always works alone. She is her own make up artist, wardrobe mistress, photographer, art director and model. I work in a very similar manner-more often than not I am alone. It’s also interesting that she uses herself as a major tool in telling the story of her characters. She’s not afraid to appear too sexual or too ugly. I also found it very inspiring that she used her art as therapy, although she often denies it. 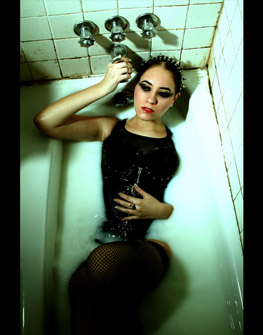 NK: I have first learned of Cindy Sherman when I wrote a paper on her for a high school photography class. We had to find an artist whose work was similar to our own and it seemed like a perfect match since I have always been drawn to self-portraiture. She enabled me to stand up for my art and what I wanted to do in my work. Year after year, professors and mentors tried to steer me away from self-portraits, to get me to turn the camera on anybody and anything but myself. But like Sherman, I don’t see my work as self-portraits. Those women aren’t me. They are characters that represent different things in different moments, and it just so happens that only I can portray them.

Some of your images are bold, others more subdued with hints of violence. Can you comment on this?

NK: Every image has a different thought process, a different inspiration. Most of my inspiration comes from music and song lyrics. Some are brighter and bolder; others are darker and come from an entirely different place, a place that is uglier and more violent. My work tends to deal with female seduction, power, sexuality, femininity, sex, and fear of seduction. I am very interested in the way that sex is power. You can hold it over someone’s head, you can play with them, and you can get your way. I’m not interested portraying a weak woman. All these ideas combine in the creation of my images. 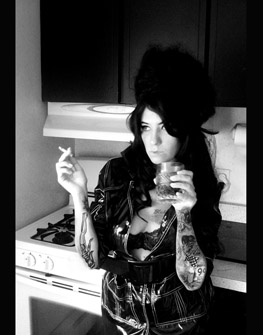 Back to Black ©Nora Kobrenik

Can you talk about the experience of women in Russia as opposed to the United States?

NK: Women are strong creatures in any country, be it the United States or Russia. Currently the environment in Russia and all the former Soviet Union countries is the same as the United States. The feminist movement has reached far and wide.

As a young photographer, have you faced any resistance in the field?

NK: Personally I have never felt oppressed or faced resistance being a woman in this field. I think that my predecessors in the 70s and 80s broke through the invisible fence that separated men and women in the art fields for good. Overall, I’ve had a rather good experience-let’s hope it continues this way!

NK: Work hard. You can’t go places without doing the legwork. Listen to advice from your mentors, but always follow your heart and your own instincts. And remember that for one person who doesn’t like your work, there will be ten who will love it.

Cindy Sherman a photographer and film director known for her photographic series and conceptual portraits. Born in Glen Ridge, New Jersey, in 1954, she studied painting at Buffalo State College, but switched to photography because she felt it allowed her to concentrate more on ideas.

In 1977, Sherman began a series of sixty-nine 8×10 B&W photographs called Untitled Film Stills, using herself as the model. Drawing on the look and feel of publicity shots and clips from noir movies, these are less self-portraits than comments on gender, identity, and cultural perception. The Museum of Modern Art purchased the entire series in 1995, the same year Sherman was awarded a Catherine T. MacArthur Foundation Award.

Other series include: Rear-Screen Projections, Centerfolds, Fairy Tales and Disasters, History Portraits and Sex Pictures. Her work has appeared in major exhibitions around the world, and is currently featured in a major exhibit at the Museum of Modern Art.