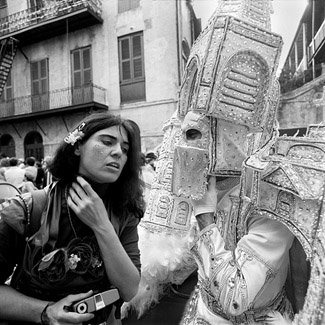 Via at Mardi Gras ©Meryl Meisler

Meryl Meisler is a photographer and art teacher celebrated for her historic images of Bushwick, Brooklyn in the decades following the arson and looting of the 1977 NYC blackout. She has won fellowships from the New York Foundation for the Arts, Time Warner, Artists Space, CETA, the China Institute and the Japan Society. Her work has been exhibited at the Brooklyn Museum, the New Museum, the Dia Center NYC, MASS MoCA, and The Whitney.

MM: Via Wynroth, the first Education Director of the International Center of Photography-through her life, profession, and our personal connection as friends.

How did you meet?

MM: In 1977 we were both houseguests of Michael P. Smith and decided to enjoy Mardi Gras together. I had a Norita Graflex 2 ¼, and Via had a plastic Diana camera with color film. We went behind the scenes to visit the Mardi Gras Indians, the floats, the Jazz club Tipitina, then went on a big crawfish-eating frenzy. We returned to New York separately, but didn’t go our separate ways. We’d become dear friends.

What did she teach you? 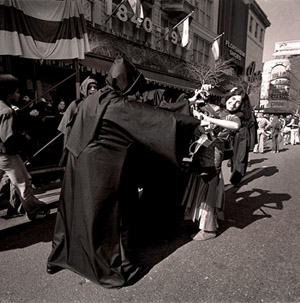 Via With the Grim Reaper, Mardi Gras, ©Meryl Meisler

MM: Via used all kinds of media and cameras-the Diana, 35mm, and 4×5-like a poet. She also made beautiful collages in shadow boxes with lace, velvet, miniature dolls, contact-sized photographs, even a deep violet butterfly! Recovering from a bone marrow transplant, she managed to videotape herself.

She taught me the importance of laughter in art and life, that equipment is less important than vision, that photography is mysterious, and teaching profound. Also that passion and integrity are more important than ambition and breaks, that time and health are never a given.

How did she come to photography?

MM: Via was born in Paris on February 20, 1940 to  Jolan Gluck, and Oskar Gluck, a renowned film producer forced from his native Austria by the Nazis. It has always been my suspicion that in order to survive, that she was sent to live with a family in Paris. If so, she was another type of Holocaust survivor, a hidden Jew. After WWII, she was reunited with her parents in New York. 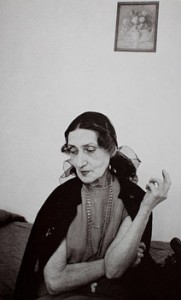 Mary, from "The Looking Glass" ©Via Wynroth

Via studied photography at the Art Institute of Chicago with Barbara Crane, then moved to Ithaca, New York, married, and became a staff photographer for a local newspaper. Her photos of the student protests and Students for a Democratic Society were published in Life Magazine.

But her parents were close friends of the Capas, and when Cornell Capa was planning the International Center of Photography, he invited Via to start an education program. She was the daughter Cornell and Edie never had.

Working in the education department at ICP in the 70s, did she feel a need to help women photographers?

MM: Via was empowered to imagine and bring to reality a model, radical education program. At a time when photographic education was mainly geared for commercial purposes, she founded a program that emphasized vision and art. She sought out and hired the radical, the inventive, the legendary and lesser known, men and women alike. It was a time when the idea of hiring men and women on their own artistic and intellectual merit was far from the norm. It wasn’t an “old boys club€ at ICP with Via in charge. I don’t know that she felt a need to help women photographers in particular, but she hired a lot of women photographers.

Why do women photographers matter?

MM: Whoa!! Why do women matter? Why does photography matter? This would take a lifetime of study, a PhD, a truth serum, a novel and many made for TV movies, plus museum shows and investigative reporting. They just do.

Via eventually took leave from her full time position ICP and traveled to Mexico. She would return to New York to teach ICP’s Summersite Programs, and on one of those visits, learned she had breast cancer. 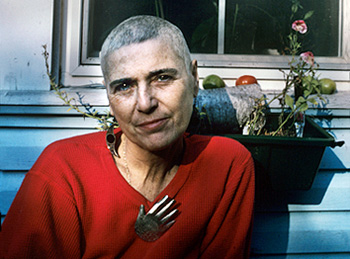 She stayed, and found new joy in a home upstate in Cornwall, one with a marvelous studio. Via had lots of plans in the works: a one-woman exhibit and a book about her beloved Yucatan, that has yet to be published.

Mrs. GlÃ¼ck survived the passing of her only child, carried the sorrow, and maintained the house and Via’s studio exactly as it had been. When Mrs. GlÃ¼ck passed away, a friend cleaning the Cornwall house found Via’s photographic work that was going to be thrown away. Via’s friend Patt Blue put a halt to that and flew in from Texas to rescue Via’s work. Patt beseeched Steve Rooney, the CFO of ICP, and the ICP collections department took Via’s negatives and archives. Patt worked night and day for weeks to organize, box and bring in Via’s life’s work to ICP.

I will never forget Via Wynroth. When my spouse Pattie and I adopted a beautiful poodle/bichon with wavy black hair we tried very hard to come up with a name. Then Via, with her beautiful black hair came to mind and we named her Via, in honor of Via Wynroth. I’m sure they would both enjoy each other’s company and be proud to share their name.

[This blog post on Via Wynroth is part of a series about contemporary women photographers taking inspiration from other women photographers. The posts are usually about how the "inspiring" photographer's work touched them and affected their own work. In most cases, this inspiration is "remote," from a great, but not personally known photographer to another photographer. But in the case of Via Wynroth, it was not a "remote" mentorship, but an actual friendship. Other people who knew Via have gently corrected the details of her life that were mentioned in Meryl's reflection of her, and we have tried to incorporate these. It is wonderful to know that people care about Via and remember her, and we give thanks to them. She truly was inspiring.]