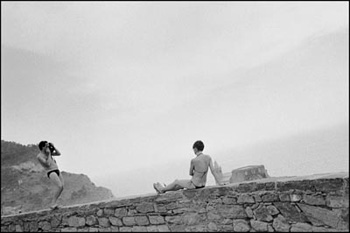 Couple on the Italian Riviera in summer ©Susan May Tell

Susan May Tell is an award-winning fine art photographer whose work has been showcased in solo exhibitions at the Museum of Art  |  Fort Lauderdale; the Griffin Museum of Photography; the University of California at San Francisco; and the Avenue B Gallery. Solo exhibitions include A Requiem: tribute to the spiritual space at Auschwitz; Structured Moments; and Real / Unreal: urban landscapes of the 1980′s.

Tell’s photographs are in the Smithsonian’s Samuel Wagstaff Collection, and have been featured in group exhibitions at the Monmouth Museum; the Phoenix Art Museum; and the Barrett Art Center, where Malcolm Daniel, Curator in Charge of the Department of Photographs at the Metropolitan Museum of Art, awarded her First Place. In 2010, Nat Trotman, Associate Curator of Art, Guggenheim Museum of Art, included her work in two exhibitions he juried at that same venue. 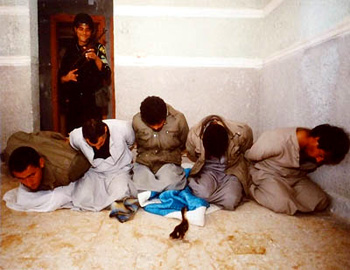 Handcuffed drug traffickers, and a duck, on a porch, Egypt ©Susan May Tell

Also a successful photojournalist, Tell spent four years based in Cairo and four years in Paris working for the New York Times, LIFE, TIME, and Newsweek Magazines. This was followed by ten years as a staff photographer and photo editor at the New York Post.

SMT: Many women photographers inspire me. However, I feel a special connection to Lilo Raymond-for her art and the memorable impact a meeting with her had on my life.

First, her art. Lilo’s brilliance was her ability to focus her camera on the most ordinary objects and imbue them with feeling: a bed with rumpled white sheets and white pillows, somewhat askew. What is the magic that takes a scene, so mundane, and transforms its present, its presence, literally shown, into a metaphor? A story that conjures the past and raises questions about its meaning, its future? And how is it that we believe these used sheets, in a bare room, have personal meaning or memory, and make ‘us,’ the viewers, care? 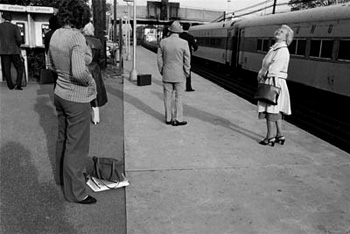 Waiting for train ©Susan May Tell

Although I first saw that particular image decades ago, it is recreated in my mind’s eye as quickly as one can say “Lilo.” Her images are spare, minimal, exquisitely yet subtly framed, and share with poetry the “economy of language.”

About that memorable meeting. It was September, 1982.  At the time I was busy creating personal work, getting exhibitions, was being considered for a New York State Photography Fellowship. The Photography Department of the School of Visual Arts hosted a registration evening. Meet a few instructors, speak with them a few moments, show them your portfolio, maybe they convince you to sign up for their course. Instead Lilo suggested that I go to my local newspaper and submit my work. Had she not suggested I could work as a photographer, I might never have even considered it. She believed I was ready to go out into the world-and so I did!

I approached a local paper, The Villager. I photographed Friday nights and Saturdays, developed film and made prints on Sundays, and on Monday morning, on my way to my real job, slid my prints under their door. They paid $6 for each published photo.

Six weeks later, my solo exhibition People Alone opened in New York City. With prints from that exhibition, plus the tear sheets from The Villager, the New York Times gave me my 1st assignment.

How did you feel?

SMT: For me, it was the start of a beautiful adventure. Meant to be. A ‘zen’ thing. Lots of responsibility. Before I had only to satisfy myself when I pressed that shutter button, now I felt compelled to satisfy the client, do justice to the subject/story- AND continue to satisfy my artistic self all at the same time. A new challenge. Huge challenge. I enjoy challenges.

Lilo Raymond was born in Frankfurt, Germany, in 1922. Fleeing the Nazis, she came to New York in the late 1930s, and supported herself with different jobs. In her late thirties, she began studying photography with David Vestal at the Photo League. A few years later she began to accept commercial jobs and exhibit her fine art images, most of which were spare, black and white, and taken in natural light.

In a 2008 interview with Beth E. Wilson, Raymond said: “I was always centering in on very simple things, like a vase of flowers…. I think what I do is that I stare at something, and then it invites me to take a picture.€

Books featuring Raymond’s images include: Revealing Light: Photographs; Linens and Lace; and Simple Wisdom: €¨Shaker Sayings, Poems, and Songs. Her work is in many collections, including the Museum of Modern Art, the Metropolitan Museum of Art, and the Victoria and Albert Museum, and in 2008 was featured in a retrospective at the Samuel Dorsky Museum of Art at SUNY New Paltz. That year Raymond also received the Vision Award from the Center for Photography at Woodstock.