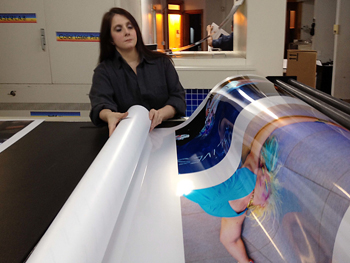 Beth Schiffer in her lab

Beth Schiffer graduated from The School of Visual Arts with a BFA, and took a job as a “spotter” in a commercial color lab, even though her primary interest was black and white photography. Impressed by her work ethic, the manager trained her as a color printer, and she discovered a love of and talent for making other photographers’ work look its best. In 1992, she opened her highly regarded Pro>Photo Labs in Tribeca, and has since worked with major players in many industries and “some of the most amazing artists in the world.€

BS: Beyond a doubt, this artist is Carrie Mae Weems. I first met Carrie when she came to my lab to print her wonderful series “From Here I Saw What Happened and I Cried.€ It’s composed of thirty-four appropriated photographs of African-American slaves, which Carrie found mostly in the Harvard University Archives. The photographs are in black and white, but she printed them in a deep red tone, which I always thought was symbolic of blood.

All the images are displayed behind a circular black mat, with a thick black wooden frame. The glass covering each photograph is etched with words and phrases of prejudice, racism and stereotyping. The slaves have no names. They are identified by their role on the plantation. For example, a young man is identified as “RIDER’S & MEN OF LETTERS.€ Carrie’s message comes out loud and strong: a slave was not a person, he or she was just a function. Her message is about her own race, but I think that any group of people who have been oppressed can fully identify with it. I am pretty sure that Carrie intended her message to go beyond slavery, and to be an indictment of abuse perpetrated on people because of their ethnicity, gender, sexual preference, religion, or beliefs.

I hit the books while I was printing the exhibition, because I needed to know why the Founders of our country did not abolish slavery when they wrote the Constitution. What I found was that some of our heroes were hypocritical on the subject. Thomas Jefferson, who wrote the Declaration of Independence, was a slave owner, as were many other Founders of the United States of America. Jefferson wrote, ” We hold these truths to be self-evident, that all men are created equal, that they are endowed by their Creator with certain inalienable Rights, that among these are Life, Liberty, and the Pursuit of Happiness.” Those who proclaimed this in 1776 thought it pertained to themselves, but not to Negro slaves, whom they considered inferior and not “created equal.” They deprived them of liberty and the pursuit of happiness.

For the purpose of taxation and representation in the legislature, slaves were counted as 3/5ths of a person in the U.S. Constitution. The Constitution prohibited the slave trade, not at the ratification of the Constitution in 1787, but 21 years later. It did not end slavery. Slave owners were willing to stop importing slaves because they had enough through children born to slaves. Many Founders believed that slavery was wrong, but their economic interests superseded their principles.

I think I was not alone in being inspired by Carrie Mae Weems to learn more about the institution of slavery, which is blight on our history. She captures this inhumanity in a way that is more powerful than any writing on the subject. It hits you like a punch in the stomach. Carrie said she cried, and so do we, the viewers of this series.

Aside from being a devoted fan of Carrie’s work, I also have tremendous respect for her as a woman. She’s younger than my mother, but when I first met Carrie, she immediately reminded me of her in many ways.

Growing up in the 70′s, most of my friends and classmates still had stay-at-home moms. My mother, however, was educated and a professional. She was, and still is very beautiful. When she was young, she was a model who was represented by one of the best agencies of that time. Although she worked steadily, it really didn’t interest her at all. She was much more interested in learning and education and being recognized for those assets. She went on to be a professor, a school principal, and an executive in a government organization.

My mother taught me by her example and her words, to pursue my own talents and dreams, and to be independent and self-sufficient. Having my own business was a natural course for me.

I have always respected women who can be strong and independent, and still be attractive and feminine. Carrie Mae Weems exemplifies these values. When we’ve worked together, she always knew exactly what she wanted to say. She was confident, self-assured, warm and nurturing, caring, generous, respectful, sexy, beautiful and very, very feminine.

In addition to racial issues, Weem’s work also focuses on gender and family, and the traditional roles and relationships in the African-American community. This is the topic of one of my favorite Weem’s series, “The Kitchen Table.” In it, Carrie carefully staged twenty different scenes at her at her kitchen table. Using herself as the subject, and taking each photograph from approximately the same point of view, each individual image depicts a women’s identity in relationship to her husband or lover, a mother’s with her daughter, as well as friendships and relationships with women. This work gives the viewer a revealing insight into a women’s role in the African-American culture.

There is one more thing that I would like to thank Carrie Mae Weems for. Carrie was so generous, and because she knew how much I admired her work, she gave me a gift of two pieces of art from both of the series that I worked on. I cherish these pieces, and realize we are often unaware of the difference we make in peoples lives! 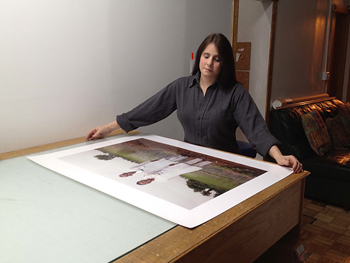 Beth Schiffer in her lab

As a business woman, have you faced discrimination because of your gender?

BS: As a lab owner, I have not experienced discrimination with artists and photographers, photo editors, gallerys, etc. I do recall when I was pregnant and when my first child was born, keeping it a secret from clients that I didn’t know well, such as photo editors and art directors because I was afraid they would have concerns about my availability and dedication to my business. I remember thinking if I was a new father, this wouldn’t be the case. People often think that a new father will work harder because he has a child to support.

But a funny thing happened. Little by little, it was revealed that some of these photo editors and art directors were also having children of their own, and I often felt a camaraderie and understanding between us.

Outside the creative industry, I learned that I paid much more, often with much higher interest rates, for very expensive leased equipment. It is usual for business owners to lease equipment for five years, with a $1 buy out. During some business expansions, I learned I had paid significantly more for the same piece of equipment than male lab owners did. When one lab owner saw what I had paid for the same exact film processor, he was shocked and showed me a receipt that was about 40% less than what I paid. Hearing this, I did some further investigation. What I learned was that buying this equipment is similar to buying a car-negotiating is expected. Because I bought equipment from the same people, over and over again over the years, I do feel I was taken advantage of. Whether this is because I’m a woman, I can’t say; at the very least, I don’t think I intimidated the salesmen at all. In the future, I will know a lot better.

Do you feel that women photographers are in a good place today or is there more work to be done?

BS: I really can’t say. I know that maybe half of my clients are women, but I think most of my more successful clients are men. I feel that women should continue supporting other women and that woman artists should keep up the great work they’ve been doing.

Despite their many accomplishments, women are often forced to make hard choices between their personal and professional lives. Have events in your own life affected your business? 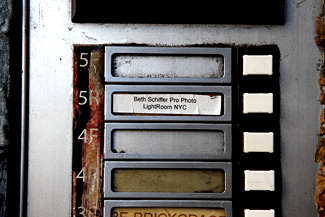 BS: As the mother of two, there were many times I felt conflicted about my devotion to my kids and my business. I was so fortunate to have an amazing woman working for me at home. My kids were crazy about her, and so was I. I often felt guilty, but always made sure they came first and was present at important events. I think my biggest regret was spoiling them because I felt guilty for working so much.

BS: The first advice I’d give to women photographers is that if you choose to have a family, have a good plan about how to balance family and work. The other advice for every photographer, male or female, is that in these hard times it pays to diversify. Think of new ways to make a living as a photographer. Photography is a wonderful art form, but it is still a business.

Carrie Mae Weems is a photographer with numerous, magnificent bodies of work. Her early series were in a documentary vein, but have grown deeper and richer to include appropriated images, text, fabric, audio and video. With an artist’s eye, determination and compassion, she has cast a light onto people overlooked by history and history that wasn’t counted as history.

Weems was born in 1953 in Portland, Oregon, and had an early interest in dance and street theater. She began taking pictures in 1973, and has a BFA from the California Institute of the Arts, and an MFA in photography from the University of California, San Diego. Her work has been exhibited widely, and in September of 2012, will be the subject of a major retrospective at the Frist Center for the Visual Arts in Nashville. This exhibit will travel to the Portland Art Museum, the Cleveland Museum of Art, and the Guggenheim Museum. She is represented by the Jack Shainman Gallery in New York.