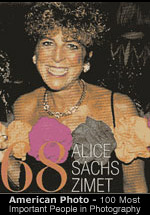 Alice Sachs Zimet is President of Arts + Business Partners, a company she founded in 1999 to consult on issues of corporate marketing and sponsorship in the arts. A pioneer in this field, she created the first Cultural Affairs Marketing Group at The Chase Manhattan Bank, and used the arts to brand Chase globally and generate over $2 billion in new business.

Zimet combines a knowledge and love of pop culture, high culture and business to craft unique marketing strategies for both business and non-profit clients. She is a supporter of all the arts, and an avid and savvy collector of photography. 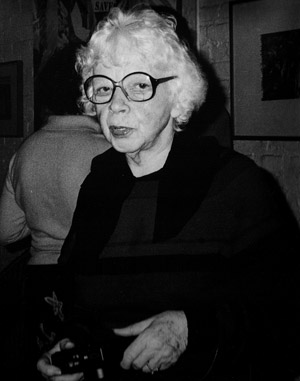 Who is your favorite women photographer?

ASZ: I think my favorite is Lisette Model. I own two portraits by Model: The Bather and the Singer in Sammy’s Bowery CafÃ©. If you had asked me 20 years ago, I would never have imagined owning these works. But I have become increasingly interested in portraits, and particularly the “in your face€ strong kind. Lisette had a way of looking at life with subjects that are not always attractive in the traditional sense. But they are powerful portrayals of the human spirit, which is what grabs me.

What inspired you to start collecting photographs?

ASZ: I began to collect photography in 1985, ten years after I was an intern at the International Center of Photography (during its inaugural year). I was on a field trip with ICP to see a portion of Sam Wagstaff’s collection at the Parish Art Museum on Long Island. “Flowers€ was the theme of the show. A certain image by Andrew Bush just spoke to me of all the things I grew up with: a close up of a living room bookcase with a vase of fresh flowers, family photos and a painting.

But the first photograph that entered my collection (through at the time it wasn’t officially a collection) was a wedding portrait of my mother, taken by Philippe Halsman in 1947! She gave it to me as a gift…and had no clue this image would start me on my way. The collection now includes nearly 200 images.

What other women photographers do you have in your collection?

ASZ: Continuing on the theme of strong yet humanistic portraits, I have an early black and white image of a drag queen by Nan Goldin, taken in the early 1970s (which I lent to the Whitney for her retrospective): the drag queen lighting a cigarette of a fellow who is actually wall paper! A great Reinike Dikstra of an awkward teenage bather, a soulful portrait of a child by Hellen von Meene, a late 1920′s swirling dancer by Lotte Jacobi, and an amazing portrait of a young black boy holding a (toy) gun from the 1940s in Harlem by Helen Levitt.

Another theme running through the collection is images that are tied to France. I have a wonderfully geometric bathing scene Le Brusc by Martine Franck. I think subconsciously she was influenced by her husband, Henri Cartier Bresson, because of the picture’s geometric make up.

Finally, I have about 30 portraits of artists or images that refer to the history of art. Included in this grouping is a great Cindy Sherman as Lucille Ball, a Berenice Abbott of Jean Cocteau, and Barbara Morgan’s portrait of Martha Graham. Yasumo Morimura dresses up as one of the Princesses in Velasquez’s Las Meninas-not a female photographer, but a photographer who dresses up as a woman.

Lisette Model was born to a well-off Viennese family in 1901 (sometimes the date given is 1906). Her education was broad: she learned several languages, traveled, and studied music with the composer Arnold Schoenberg, who she considered to be a great influence on her life.

After her father died in 1924, the family moved to France where she married painter Evsa Model and, borrowing her sister’s camera, began to take photographs. One iconic series captured the idle rich along the Promenade des Anglais in Nice. In 1938, she and her husband moved to New York.

After P.M. Magazine featured Model’s Promenade des Anglais images, other publications like Harper’s Bazaar and Look began to seek her out. Her work was exhibited at the Museum of Modern Art, with solo shows at the Photo League, the Chicago Art Institute and the San Francisco Palace of the Legion of Honor. In the late 1940s, she began teaching at the California School of Fine Arts, then in 1951, at the New School for Social Research in New York, where she influenced many talented photographers like Diane Arbus, Larry Fink and Bruce. Model passed away in 1983.