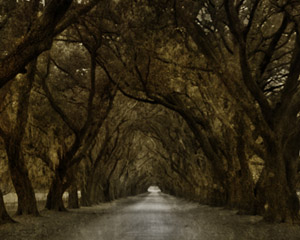 Ann George is an award-winning fine art photographer born and raised in Louisiana. For many years she worked as a critical care nurse, but when she was diagnosed with Multiple Sclerosis, turned seriously to photography. Since then George’s work has won numerous awards and been exhibited widely. She  lives with her husband and four sons in Shreveport, Louisiana, and is represented by Nevares Fine Art in New York.

AG: Josephine Sacabo. While strolling around the New Orleans French quarter one day in 1995, I happened to wander into the The A Gallery For Fine Art Photography. Josephine’s Susana San Juan series was represented there and it took my breath away! The Susana San Juan image was staring into my soul. I felt a fluttering inside my middle like a warm glowing sensation. I moved to the next and the next as if I was floating.  El Vuelo, El Arbolito, El Final, and El Camino (which I now proudly own), all called to me. I never knew that photographs could make one feel that way. They were introspective and mysterious and reached down deep. That day I understood what all the fuss over art was all about. I never had such an appreciation for it until then. It was right there at that moment staring at Susana San Juan that I knew that one day I wanted to learn how to photograph in a way that made me feel like that. To tell you the truth, I have never reached that same sensation with my own work. I think it will be something I continue to chase as I improve and perfect and try new things, always moving forward toward that goal. Little did I know at that point that it would not just be the work that inspired me, but the woman as well. The years between that first epiphany and actually picking up the camera myself were many. During that time, I learned about the woman and her work that stirred my soul. I learned that the genesis for Josephine’s work was literature and poetry, that the Susana San Juanseries was a depiction of a heroine Susana San Juan, written by Juan Rulfo, a Mexican novelist, whose entire discourse is one of memory and delusions, delivered from her tomb. 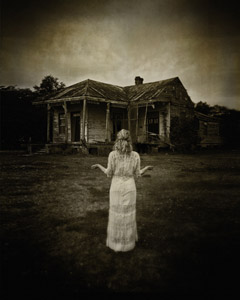 Echos Of The Exiles ©Ann George

I followed Josephine’s new works, never dreaming that one day I would know her not only as my inspiration but also as a mentor and as a friend.

And so, as it came to pass, years later I had my opportunity to delve into photography and it became my passion. I learned from some of the greatest woman photographers and teachers such as Joyce Wilson and Carol Andrews. Joyce inspired me with her ability to depict the female form as art, and I moved to digital and learned Photoshop. I tried new things always reaching for Susana San Juan. I never felt like my work had merit. I think it was because that elusive impact was missing to me in my work. As grace provided, Josephine was giving a polymer photogravure workshop. I signed up, amazed at the opportunity to meet my hero.  It was during this time that Josephine saw my work and pushed me out of the nest. She became my biggest cheerleader and had a no nonsense attitude toward my self-doubt. “Get on with it Girl, you are the real deal,€ she said in her delightful, slight Spanish accent. She invited me back to stay with her and work, which of course I did. It was the most pivotal point in my photographic and personal life. My work is in the world because of Josephine. Her confidence in me is the only reason that you are reading my words. She told me to get it out there and as much as I felt unworthy I could not ignore her. I hit the ground running and since then her words have been validated by others. I hope one day not only create an image that truly moves me but to be “A Josephine€ to another woman photographer. 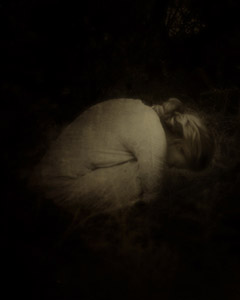 Oracle In The Oak ©Ann George

Can you talk about the tough choices women have to make between their personal and professional lives?

AG: It is true that we want it all. At least it is for me. I want to be successful at all I do as a wife, as a mother, as a nurse, and a photographer. It is impossible to give all to everything, but I tried. Believe me it wasn’t pretty. I decided that I must set clear priorities for myself and live by them. Once I outlined these priorities, my faith, my family and then my photography, and set real boundaries for myself, I was comfortable saying no to photography as the need arose. In fact, I put it aside for three years. It was amazing that once I was in line with these priorities, and first things came first, photography found its time.

How have events in your personal life affected your art?

AG: Photography was not my first passion. I was a critical care nurse developing a line of hospitals that dealt with only the sickest of the sick. I thought it would always be my life’s work. I always loved photography and drooled over beautiful work, but running the hospitals and being a mommy of four young boys was more than I could say grace over. That is until I myself became ill myself and was diagnosed with Multiple Sclerosis. The intensity at which I had to work was too great for my body to have anything left for my family, and so I had to step away from my beloved career. It was then that I truly turned to photography. Out of ashes comes beauty. 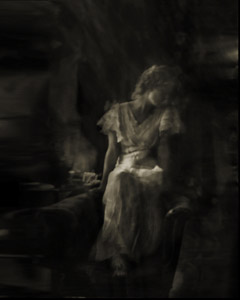 Any advice for women photographers today?
AG:  Yes! Try to:

Josephine Sacabo is a New Orleans-based photographer originally from Laredo, Texas. She was educated at Bard College, and worked in France and England, initially in the photojournalistic tradition. As her style evolved, it became more personal, and she drew inspiration from poets like Rilke, Baudelaire, MallarmÃ©, Pedro Salinas, Vincente Huiobro, Juan Rulfo, and Sor Juana Ines de la Cruz, as well as from New Orleans itself.

Sacabo’s work has been exhibited widely, including solo shows at the Woodstock Center for Photography, the Contemporary Arts Center in New Orleans, and the John Stevenson Gallery in New York. It is also in many permanent collections, including those of the Art Institute of Chicago, the BibliothÃ©que Nationale of France, the Boston Museum of Fine Arts, George Eastman House, the Metropolitan Museum of Art, the Museum of Modern Art, and the Whitney Museum of American Art.

In an e-mail this week, Sacabo said: “I am very proud of Ann’s accomplishments. She’s been my star pupil for sure.”