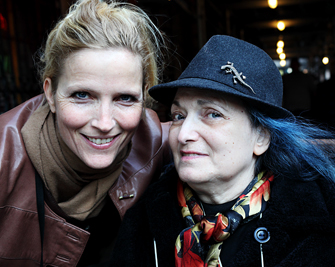 On the surface they seem an unlikely pair: Gigi Stoll is tall, slender and blond; Flo Fox is blue-haired and confined to a wheelchair. Stoll began her working life as a model, Fox as a seamstress. Then you get to know them, and realize they’re a lot alike: funny, adventurous, and dedicated to photography.

The hard knocks started early for Flo Fox. Her father died at thirty-eight, leaving three children and a pregnant wife. Her mother died of breast cancer when she was fourteen. During her late teenage years, Fox stayed with relatives, raised hell, and generally learned how to fend for herself.

She married early and for a time lived in the suburbs. She could have become a housewife, maybe even lived a regular life, but things didn’t work out that way. Instead she became a costume designer for the likes of Joe Papp and the Public Theater. With her first paycheck, bought a camera and has been taking pictures ever since. 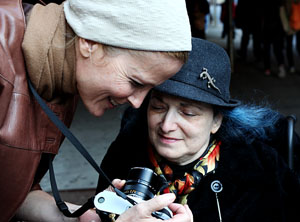 Her humorous, gritty images have appeared in LIFE Magazine, and been exhibited in Paris, London, Barcelona and Mexico. A limited edition book, Asphalt Gardens, was published in 1981, and in the early 80s, she had her own slot on A&E, The Foto-Flo Show.

Around that time, Fox was diagnosed with Multiple Sclerosis. Already blind in one eye, it reduced sight in the other to blurs and shadows. But if outward sight has failed, her inner compass is strong. She is stylish, chipper and delightful, the center of attention in a large and ever-growing group of friends. 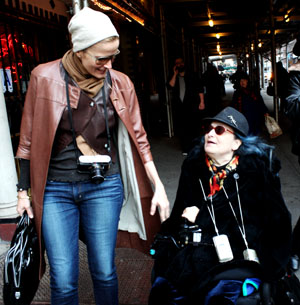 Stoll began photography in 1990 when a friend gave her an old Polaroid camera. She began snapping fellow models and interesting locales she came across on her travels. After her her series on tattoo artists, The Leu Family Iron, was featured in a New York gallery, her work began to be shown and sold worldwide. Her clients include Harper’s Bazaar, Visionaire, V Magazine, GQ Japan, El Pais, Modelinia and Life.com. Stoll is also a humanitarian, documenting medical missions for children in far-flung regions of the globe.

Not quite through with modeling, she currently portrays Lauren, an elegant matriarch, in a web and print campaign for Orient Express. 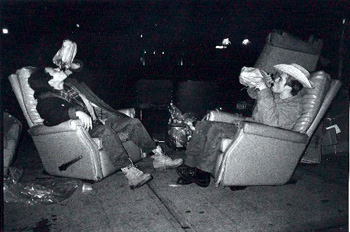 How did you two meet?

GS:  Around 1991, I was walking across 23rd Street and passed a print shop with large black and white blow-ups in the window. I was struck by their starkness and humor. I was told they came from a small book called Asphalt Gardens by Flo Fox. There was a beautiful poem by Flo on the first page and a very alluring portrait of her on the back cover. I bought the book and was told to contact her, that she loved meeting photography-minded people.

How does each of you inspire the other?

GS:  Flo really introduced photography to me and taught me how to print. We spent many years printing inside of Flo’s small bathroom in Selis Manor. I learned that photography went in a circle, and for the first time understood light through printing. We had so much fun burning and dodging with handmade tools, that we stayed up all hours of the night.

She also hooked me up for my first show, which led me to selling prints and postcards worldwide. We’ve traveled together and even had our own two-woman show.

FF:  Gigi called me and complimented my work. Ever since, she’s visited me almost every week. I’m amazed that such a young, vibrant, beautiful model/photographer can be so inspired by me and my work. I, in turn, love her work and have it hanging on my bedroom “museum” wall. 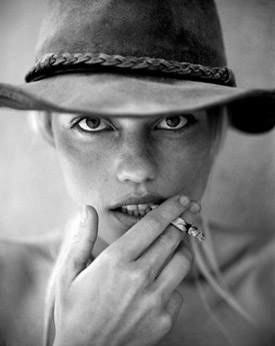 Memorable events in your friendship?

GS:  At one point, it was rumored that bee venom offered temporary relief for M.S., and Flo was buying live bees from upstate. They arrived in a small box and were sitting on top of Flo’s fridge, buzzing away. One day, she talked me into pulling a bee from the box with tweezers. When it stung her thigh along the acupuncture points, she could move her leg for a short time until the venom wore off.

FF:  One night Gigi and I were strolling along a dirt road in Woodstock, New York, and I made a turn before the road did. It was dark and damp at the bottom of the ditch where my scooter and I lay. Heroically, Gigi summoned the energy to lift me and my vehicle out of the rut.

GS:  Another time Flo went to a rehabilitation center in the Bronx, and I got a phone call to come up and break her out because she was being held against her will. She’d managed to steal her records and refused to stay any longer. The hospital said she wasn’t well enough to leave, but wearing a sign around her neck, she got herself on the local news. We made the getaway, and Flo never set foot in that place again.

GS:  Flo is a huge advocate for the physically challenged. In the later years, we’d meet at midnight to lay cement on inaccessible corners in Chelsea so she could cross the street in her three-wheeled scooter.

FF: The most important thing about photography is that just one push of the button can capture history and memories to hold onto forever.

GS:  Don’t ever stop taking pictures. You should always have a camera on you. Do it for the love and not for money. Fill the box. Step into your shot, wait till you’re invisible. When I’m shooting, nothing else exists.