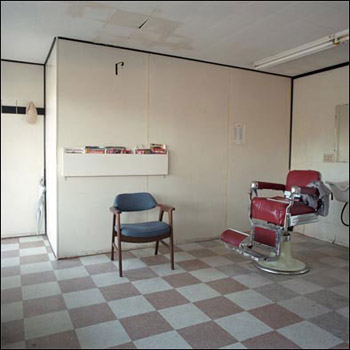 Laine Wyatt is an Associate Professor with the University of Central Florida’s School of Visual Arts & Design. She is an active member of the Society for Photographic Education (since 1995), and has served as Portfolio Reviewer at the national conference since 2005. Wyatt has exhibited her work in more than a hundred exhibitions across the country and in Europe, and has won a number of awards for individual works.

LW: Diane Arbus was the one I noticed first. I appreciate her ability and willingness to cross over to the ‘other’ not only by photographing them, but also by spending time with them. Yet when I first discovered her, it was the rawness of the work. All the images seemed to be walking a little tightrope of constrained emotional intensity. I felt a personal resonance.

LW: During my first semester away from home during an assignment for drawing class, before I ever began studying photography. I came upon her images in a magazine and chose them to reproduce in graphite. I didn’t realize it was her work-I just responded to the pictures.

Later I realized that the images had told me it was possible, preferable, that an image have an emotive life, that representation wasn’t enough. 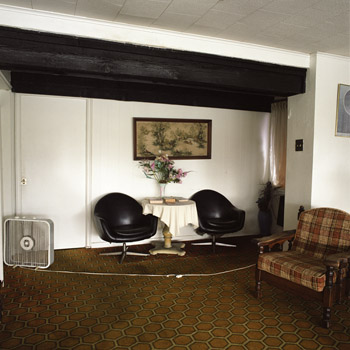 Many of your photographs take place in lonely spaces. Can you talk a little bit about this?

LW: Rarely do I set out to make certain types of photographs, as in the start of a series. I find that I just respond to visual situations. I can discuss the images academically, but it’s the emotional resonance that persuades me to make most pictures. On some level, the visual experience references an interior experience.  These images, in a general way, can speak to a sense of loss and longing, but in more specific ways, they talk about how we appoint the spaces we inhabit, and they offer us a moment in which to consider how we relate to these things and spaces. The juxtaposition of objects and their spaces suggest values, belief systems and priorities. I am intrigued by how these spaces, in their ordinariness, are arrestingly beautiful and simultaneously strange. They exist in these ways only momentarily. They are curious and commonplace, visible and invisible.

Women today are often forced to make hard choices between their personal and professional lives. Have events in your own life affected your art? 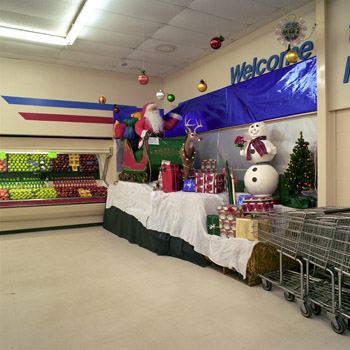 LW: Several years ago, after the loss of my father and my mother, I became the guardian for my brother, Keith, who had Downs Syndrome. In a sense, he became the child I never had. Not that I didn’t have help from my other brothers and sister, but suddenly becoming responsible for someone who couldn’t fully express or help himself was daunting, psychically overwhelming. I realized though that being Keith’s sister gave me insight into life in a way many folks can’t or aren’t willing to engage in. It has sensitized me to be outside myself. I’m able to consider other perspectives, but sometimes too this awareness produces a melancholy state.

LW: Learn to understand yourself and develop your own personal vision. Learning to know yourself is a tricky process, especially n this fast paced world. If we can each learn about our own process, which allows for intuitive honesty, we have the ability to rely on intuition which leads to the right decisions. And making the right decisions eventually creates your personal vision and work that is unique and meaningful to you.

Diane Arbus was was born in New York in 1923. Her interest in art emerged in high school, and she had early success with her husband, Allan Arbus, in advertising and fashion photography. She studied with Lisette Model at the New School, and began to photograph people she came across in the city. Some of these images were featured in 1960 in Esquire magazine (“The Vertical Journey: Six Movements of a Moment Within the Heart of the City€), and her work began to become more widely known. While many other photographers have copied her subject matter, nobody has ever photographed like Diane Arbus. Her work is unique and unmistakable; a permanent landmark in the medium of photography. Despite her success, she struggled with depression, and died by her own hand in her Westbeth apartment in 1971.