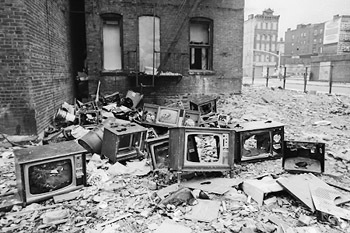 Lisa Kahane is a professional photographer specializing in portraiture and documentary work. Her images have appeared in magazines and newspapers worldwide, including The New York Times, New York Daily News, Philadelphia Inquirer, and Artforum. They have also been featured in many books, including her own Do Not Give Way To Evil: Photographs of the South Bronx 1979-1987.

In addition to solo shows, her work has been featured in exhibits at the Bronx Museum, The Museum of the City of New York, and was included in documentation for The American Century at The Whitney. Her images are in the permanent collections of the New York Public Library, the Fales Library at New York University, and the Library of Congress. Some are on view now in Occupy Wall Street at the South Street Seaport Museum, and in April will be in This Side of Paradise at the  Andrew Freedman Home. 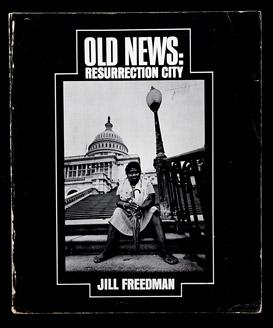 Can you talk a bit about the woman photographer who inspired you most?

LK: It’s June, 1968. An African American woman sits alone on the steps leading to the Capitol in Washington, DC. Her expression mixes anger, disappointment and resignation. Her presence dominates the government building in the distance behind her. She’s looking directly into the camera.

I remember seeing this black and white photograph, bordered by columns of text, on the editorial page of a newspaper. The credit line appears adjacent to the image-Jill Freedman. The physical presence of the woman in the photograph and the presence of a woman’s name in the credit line both had a visceral effect on me. I remember it clearly. The picture was alive with emotion. It was the first important photograph I saw that was taken and published by a woman.

As a teenager, I watched the civil rights movement on the nightly news. When Dr. King was assassinated in April ’68, I watched Harlem burn from my apartment on Morningside Drive. Three weeks later, my friends and classmates occupied buildings on the Columbia campus, effectively shutting down the university. It was overwhelming. I took a few pictures. At the beginning of June, Robert Kennedy was assassinated.

Jill Freedman’s response to the turbulent political situation was more definitive. She quit her job and marched to Washington with the Poor People’s Campaign that Dr. King had planned. She spent six weeks living in the encampment next to the mall, photographing and writing about daily life in this temporary city. Her pictures were published in the June 28th issue of Life Magazine. In 1970, Grossman Publishers brought out her first book, Old News: Resurrection City. The woman on the Capitol steps is the cover and the last page of the book. 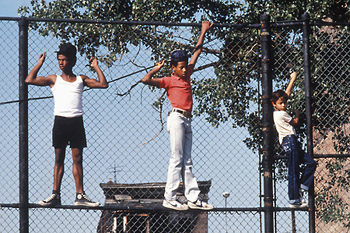 On the Fence ©Lisa Kahane

Since then, Jill has published six books about people whose lives frame our culture but whose names rarely make the news. She’s traveled with the circus, lived with firemen fighting the flames of the South Bronx in the 70s, and ridden along with police on the Lower East Side and Times Square during violent days and nights.

Biographies of women photographers often describe their education, their supportive families and staff, their influential mentors. I value these women. but their stories seem remote from my own. Jill taught herself photography and did her own darkroom work. At a time when few women were working in photojournalism, she did it anyway. She’s survived changing fashion and fortune. She speaks plainly and passionately. Her work is about people and circumstances. Her belief in photography’s power to educate is undiminished. “If you show it,” she says, “people see will see what’s wrong.”

I’ve researched the editorial page where I first saw Jill’s work – I can’t find it. The more I learn about Jill, however, the more she inspires me. 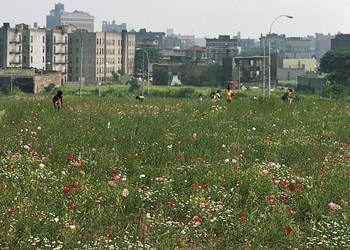 What is the role of a professional documentary photographer today as opposed to someone who happens to be on the spot with a camera phone?

LK:  Good question!  Everyone’s a critic. These days everyone’s a photographer also. I suspect a surfeit of images has blunted our perception, making good enough, good enough. When someone with a cell phone camera blocks my shot or complains I’m in their way, the joke goes sour fast. When the police pepper spray a peaceful protest, video from a cell phone camera is a very effective witness. With every gain, there’s a loss.

Berenice Abbott said “Photography helps people to see.”  Did she mean the practice or the appreciation of photography?

Jill Freedman is a legendary, self-taught documentary photographer. Her gritty images of New York street life and people living at the edge of society are in the Museum of Modern Art, the International Center of Photography, and the Smithsonian, and her many books include the classics Old News: Resurrection City, Circus Days and Street Cops.

Facing serious illness in the late 1980′s, Freedman disengaged from photography and New York, but eventually made her way back. She is currently putting together a website and working on a new book about the city in the 60′s, 70′s, and 80′s, when it was, as she says, “still New York.€

In a phone conversation this week, Ms. Freedman said that in 1968, she “wasn’t even a photographer” when she took the picture on the Capitol steps. “I was very angry and quit my job and went down. It was a moment of history I wanted to shoot.€

The Poor People’s Campaign was organized in 1967 by Martin Luther King, Jr. and the Southern Christian Leadership Conference to address economic inequity. After Dr. King was assassinated on April 14, 1968, the leaders decided to go ahead with the campaign in his honor.

In mid-May, demonstrators began to protest in Washington, D.C., and thousands of poor people set up makeshift dwellings known as “Resurrection City.€ It was shut down in mid-June, the hoped for economic bill of rights never realized. But if the voices raised in protest and hope have faded, the pictures Freedman took will endure as a lasting record of that time.

For a narrated slide show on Freedman’s coverage of this event, visit NPR.