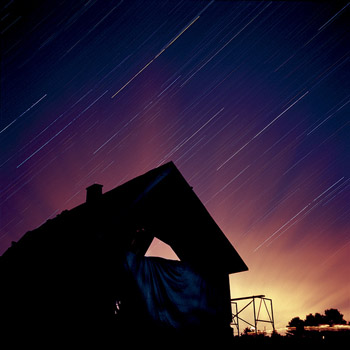 Kay Kenny is a painter and photographer who lives and works in New Jersey. She has a BFA and MFA from Syracuse University, and an MA from Rutgers University, all in the visual arts. She has taught photography for over fifteen years at New York University and the International Center of Photography.

Kenny has had numerous solo shows, most recently in Taiwan, Colombia, Texas and New York City. In 2009, she won a Lucie Award Honorable Mention for Fine Art Photography, and is a three-time recipient of an NJSCA fellowship.

Recent publications about her work include Photography’s Antiquarian Avant-Garde, by Lyle Rexer, and Light & Lens: Photography in the Digital Age and Photographic Possibilities by Robert Hirsch. Kenny also writes art criticism and articles about the visual arts for various magazines.

Tell me about the woman photographer who inspired you.

KK: Photography as an art form began rather abruptly for me. As a graduate student, I was a painter about to register for a printmaking class when my advisor took me aside and asked me to register for his color photography class. This was long before digital, and I had never been in a darkroom or had any formal training in photography. He planned to have me teach the class the following semester. My history of art did not even include photography. The result was a flurry of reading-every photo book I could get my hands on. I soon found that my approach to photo imaging was profoundly different from the typical male photographers in the books I read. 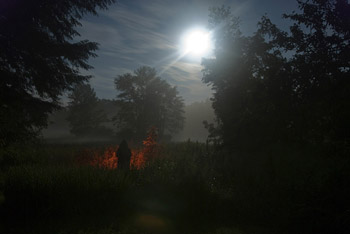 By the 1970′s the feminist second wave was in full swing, and photography as a fine art also began to emerge in galleries devoted to contemporary photography (Witkin Gallery,1969 and Light Gallery, circa 1973). However, publications remained the major source of information about photographers. Women photographers were scarcely mentioned in the various anthologies: Nathan Lyons’ Photographers on Photography (Prentice Hall/George Eastman House, 1966) includes two contemporary women: Berenice Abbott and Dorothea Lange; both of whom are included with twelve other women photographers among the hundred plus men cited in Beaumont Newhall’s History of Photography (5th Edition, 1993).

Groundbreaking books such as The Woman’s Eye by Ann Tucker (Knopf Publishing, 1973), provided the few opportunities to view contemporary women photographers. Judy Dater was one of the few whose work was available in print at the time, and her images immediately resonated with me. Those early portraits of hers from the 1960′s: those women-they had power! Their gaze was direct; their nudity neither sublime nor apologetic; their settings straight forward and familiar. I also sensed an offbeat sense of humor-a subtle parody of the male gaze caught in the act. 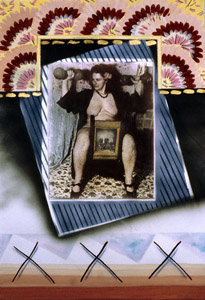 In those years, my photography began to develop a very personal narrative style using models, especially women, as part of a storyboard of text and image. Dater’s portraits began to creep into my direction and styling efforts. At times, it seems as if I was directly paraphrasing her images in my narratives. Since I worked with text, and processed my images by the gum bichromate process, Dater’s influence melded with that of Bea Nettles (whose work was also included in The Woman’s Eye and was kind enough to teach me the gum process) and the Surrealist women I admired, such as painters Leonora Carrington and Leonora Fini, and the photographer Lee Miller. The surrealist women were largely invisible at that time, little of their images and information were included in textbooks. It was through a lecture I happened to attend by art historian, Gloria Orenstein, that I learned of these women in the early 1970′s.

Manipulated photography such as mine was not an easy sell in those days: non-silver was a fringe movement in itself and montaged contemporary non-silver images did not fit into any category among photo galleries dedicated to educating the public about photography as a fine art. Foto Gallery in New York City and other non-profit spaces were the exceptions.

By the 1980′s, photography began to open up to new approaches as well as acknowledging more women photographers in exhibits and print. Today there seems to be a second wave of interest in non-silver as well as a major shift in the way photography is incorporated into the fine arts landscape. Perhaps it is the digital revolution that allows for the really large printing of photographic images and digital manipulation; perhaps it is the inclusion of photography in galleries once dedicated to painting and works on paper. Whatever the reason, some barriers no longer exist for photographers working outside the mainstream.

KK: Have there been attitude changes in recognizing women photographers? I believe so: I do think there is a plethora of information about contemporary as well as historical women photographers. I do not dismiss the inherent difficulties in achieving and sustaining a career as an artist: it is actually harder now that art schools are churning out so many new and hopeful young graduates! 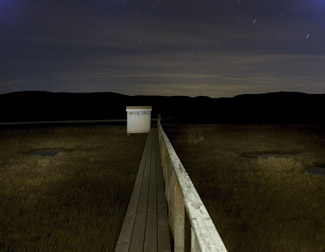 Any advice for women photographers today?

KK: While getting a monograph published by a noted publisher may be a matter of money and influence, there are so many other opportunities for work to be seen.  A website that is up-to-date, well constructed and linked to other sites is frankly so much more effective that a book in the remainder bin at Barnes & Noble. Of course, with books-on-demand companies such as Blurb, creating and publishing a book as a showcase of one’s work is a fabulous opportunity.

As for my own work: over the last decade, it has evolved into night landscapes. These images are a good deal easier to sell and exhibit than the gum bichromate narratives. However, there is still a little of Judy Dater’s earlier influence there and I have not abandoned portraiture: it is just a little more dimly lit.

Judy Dater was born in Hollywood in 1941. She began her studies at U.C.L.A., then transferred to San Francisco State. There she took a photography course with Jack Welpott, with whom she had an affair and later married. Her early work, created as the Women’s Movement was taking off, challenged the stereotypical roles of women in society. She presented the female form in a stark and confrontational manner-naked, not nude-and often turned the camera on herself in various guises and scenarios.

In 1975, Dater and Welpott published Women and Other Visions. They divorced in the early 1980′s.

Dater developed a close friendship with Imogen Cunningham, and published Imogen Cunningham: A Portrait after the photographer’s death. Included in the book is her famous image of Cunningham photographing a nude model, Twinka Thiebaud (daughter of artist Wayne Thiebaud), in the woods.