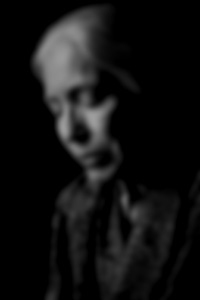 This participating photographer asked to remain anonymous and PWP honored her request.

A: More than anyone else, my mother. I almost hate to admit it. We were incredibly different and fought a lot. Our fights were major events in the household. Frazier and Ali, Ali and Liston, Holyfield, Tyson-they had nothing on mom and me. We could duke it out like nobody’s business. She was made of steel. If you wanted praise, you had to earn it. If you wanted love, you had to win it, and it was of the tougher variety.

Mom had a dark side and a wild side. She appeared to be one of those respectable middle class ladies, but was in part unhappy with this role. To liven things up, she would go on a bender from time to time. I was the target of some of the rage the liquor stirred up. When I got a camera, I photographed some of that too. She was a good model. No hamming it up, no silly poses. She had the ability to look you right back in the eye. She knew who she was! In an odd way, I suppose, she was at peace with herself, even if it was an angry sort of peace.

Yet somewhere in the midst of the liquor and angry words, once the camera came out, there would be a change, ever so slight, in her mood and mine. Some hex had been broken. It was like we were meeting on a special plane, united in purpose. We were going to make a picture! Together! I would give a few gentle directions, and she would follow, more mellow now. Maybe it was a distraction that reset some internal switch. For me, a lesson was learned: art mattered and was worth pausing for. Another lesson was that there is a way to every person, through the mess of demons, shadows and loony ideas. That you have to try to understand the phobias and fears as the other person experiences them.

One semester I signed up for photography, but when we got to the camera store, got cold feet. But if I was hesitant, she was insistent. As the employees vacuumed and tidied up around us, hoping to get started on their weekend, eavesdropping on the spellbinding, emotionally charged scene, a decision was made and a couple of hundred dollars forked over at the very last minute. I had a camera, I began.

While she is no longer here, her determination informs everything I do. She is with me always-every frame, every shot. At my shoulder, my angel, and I guess a little bit my demon too. We all need demons, a few at least. No life is complete without them. They make us who we are and keep us going.

The funny thing is, my mother was a good photographer herself. After seeing me go at it awhile, she decided that she wanted a camera too, a real one. So my father and I bought her a really good one (which I still have), and signed her up for a course. Her talent was evident from the start, but the odd combination of extreme sensitivity and extreme volatility came into play, and she and the teacher developed a dislike for each other. Okay, the teacher probably had a mild dislike, but my mother had a full-on hate that flared into rage. The other students were “coddled” and “pampered;” they were the “class pets” while she was ignored. As you can imagine, listening to the back end of this drama was difficult. The class ended and slowly her interest faded (as did that particular rage), and mom went back happily to her instamatic, badgering the man at the local camera store (who qualified for sainthood) about paper and printing choices and how to put pictures together to make a panorama.

Any advice for photographers today?

A: Do the best you can. And hug your mom.

On a personal note, I would like to thank Beth Portnoi Shaw, Trish Mayo, Terry Berenson, Adele Epstein, Pamela Greene, Meryl Meisler and Jackie Neale Chadwick for their help and support throughout this project.