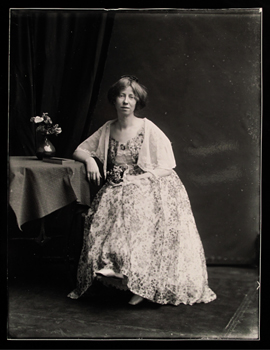 In November of 1872, Susan B. Anthony was arrested for voting in the presidential election of the United States. She argued that she was guaranteed that right under the recently passed Fourteenth Amendment, but seven months later was convicted and fined a hundred dollars, a fine she refused to pay.

Today the world has changed and is finally waking up to the greatness of women. They run countries and write laws, lead corporations and found movements dedicated to justice and social change. Governments know that money given to them will be spent on families and education; that societies where they are empowered are more stable and enduring. In the United States, the majority of women work, in addition to caring for children, spouses and elderly parents. Their contributions are enormous.

But recognition has been slow, and the struggle continues, as does the effort to claim their own history. To make history, history has to know you’re there. For much of time, women have been invisible.

This very nearly was the case with Vivian Maier. Born in 1926, she worked as a nanny, obsessively photographing the streets of Chicago in her spare time. Only after her death when a cache of negatives was discovered in her storage unit, did the world learn of her gifts. The question is not how did she slip by, but how many other women have slipped by in every field of human endeavor? How much learning and wisdom has been lost? How much talent  wasted? 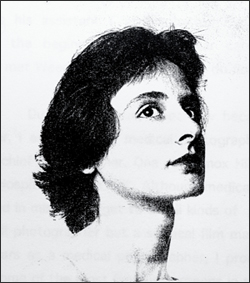 For Dianora Niccolini, the lives of women photographers mattered. Born in Florence, Italy in 1936, she studied at the Germain School of Photography in New York, where she was the only woman in the class. Not worried when the men “always got the pat on the back” in school, she was appalled to find herself shut out of the marketplace. One agency told her straight: “We won’t hire women. We’ve never hired a woman as a photographer before.€

Eventually she found work at Cornell Medical College-sweeping up after the male photographers. Singled out and quizzed relentlessly by a male supervisor, she moved on, founding the medical photography departments at Lenox Hill and St. Clare’s. In her personal work, she is known for her male nudes which have been exhibited at the Witkin and Neikrug galleries, and most recently at the Florida Museum of Photographic Arts.

In today’s world the getting of information is so quick and easy that we forget it wasn’t always so. Hit a button and your laptop comes on. Touch a few keys and you can summon the work of just about any photographer in the world. But in the 1970s and 80s, if you wanted to learn about photographers and their work, you had to get a book or magazine or see a show. If you were a photographer, you had to be shown and get into print. For women photographers, fewer in number, less published and exhibited than their male counterparts, the risk of legacies slipping by was very real. Inspired by the Women’s Movement, Niccolini began to organize and publish on their behalf. 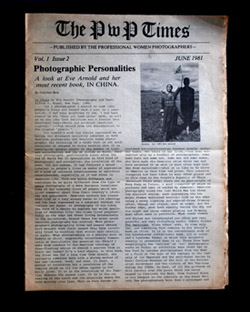 In 1974, she founded Women Photographers of New York, and in 1980, became the first president of PWP. Letters began pouring in from women all over the country begging for help on how to become a photographer. Niccolini wanted to provide information for them as well as historical context, and began publishing PWP Times.

Each issue was devoted to a prominent woman photographer like Barbara Morgan, Maggie Sherwood, and Lisette Model, all of whom Niccolini knew personally. ”They were remarkable,” she said, ”pioneers in their own right. I wanted to highlight these women who opened the door and paved the way, especially those getting on in years.” Creating a record of their work and life was important. “You need to honor your history,” she said, “and learn from it.”

Putting out PWP Times took work. It was done on a desktop that was real, not virtual, where cut and paste were not keyboard commands. There were late hours, numerous changes using typewriter correction fluid, and mad dashes to the printer. But it was a labor of love, Niccolini’s contribution to the forward momentum of women in the field. 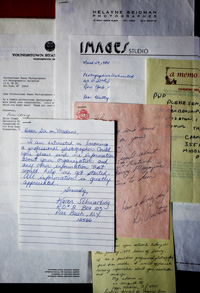 She also preserved the many query letters that came in. “Isn’t it interesting,” she wrote, “to read the history of our country? Can you imagine not having one?€ Reading these letters today the yearning and need is clear, as is the distance traveled by women photographers in just a few decades. 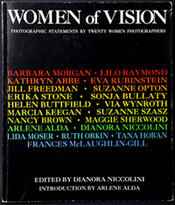 In 1982, Niccolini published WOMEN of VISON, one of the first anthologies on women photographers. In addition to their images, it also featured artistic statements, biographical sketches, and portraits of the twenty participants taken by Stephanie Cohen. Niccolini dedicated the book to Imogen Cunningham even though she was dead, because she was “a true pioneer, way ahead of her time.” That Cunningham also photographed her husband in the nude resonated with Niccolini, who was working on a series of male nudes herself.

In 1984, burnt out by work and the death of her mother, Niccolini pulled back. She concentrated on her own images and became involved in other causes. Today she remains a staunch supporter of women photographers. For her, it wasn’t one who inspired, but the many. And in honoring their lives and work, she made a lasting mark of her own.

In honor of Women’s History Month, PWP spoke with thirty women photographers about the woman photographers who influenced them. These interviews begin tomorrow with Lauren Fleishman, and will run through March 31st at www.pwponline.org/blog. 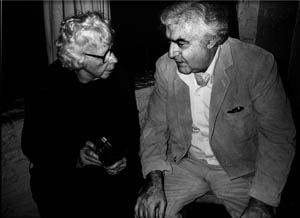