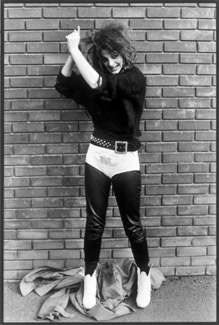 Ari Up, lead singer of The Slits, 1977 ©Caroline Coon/Camera Press

Caroline Coon is a multi-talented artist born and based in Britain. She is a painter, designer and photographer whose work has been exhibited at major London galleries, including the Saatchi Gallery and the Tate. Her photographs are in the National Portrait Gallery, and currently on display at the Strand Gallery in She-Bop-a-Lula, an exhibit celebrating female singers captured by women photographers.

In the 1970′s and 80′s, Coon wrote about, designed for, and photographed a number of Punk Rock bands, including The Slits and The Clash. Her New Wave Punk Rock Explosion is an inside, “as it happened” story of punk, with iconic images, and commentary by musicians and fans.

CC: The woman photographer I’d like to spotlight from a cluster of creative women who inspired me in my early twenties is Ida Kar. Photography was central to my life as a fine art student in the mid 1960′s because it was widely feared that this mechanical, fast image making would be the death of painting. Since I was a painter I hoped painting would survive, but never the less I was fascinated by photography especially when I discovered that heroes like Degas and Toulouse-Lautrec used photography as a sketch aid to their painting almost from the moment the camera was invented.

As a teenager at art school, with few women students and not one women tutor, I felt very isolated. I needed examples of creative women to identify with. Then, one day walking through Soho with an older male artist friend of mine, he said to me: ‘That’s Ida Kar’s studio!’ My ignorance made me blush, but the name stuck in my mind and my heart leapt when shortly thereafter I saw Ida Kar as name credit in a magazine against a portrait of Bridget Rilley. Here was the photographer as artist making a woman artist the subject of her work. Perfect! 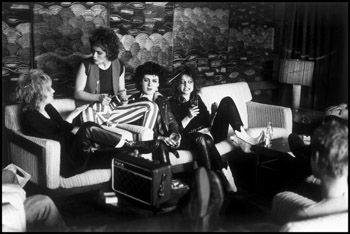 The Slits on tour - the hotel lobby, 1977 ©Caroline Coon/Camera Press

CC: At art school in the 1960′s none of the creative women who had been exemplary in various avant garde movements were ‘taught’. In fact women were erased from the canon once these movements were written up by what we now call “white male gatekeepers.” Discovering women like Ida Kar gave me my psychological backbone. I thought it was outrageous that no tutor, not in any department, had told us students about, say, Madame Yevonde or Tina Modotti or Dorothea Lange. I searched out information about these women, aided by the feminist movement’s revalation of all the ‘buried’ creative woman of the past who knocked down the sexist lie that there had never been nor could there ever be great women artists.

Women like Ida Kar were crucial to me, not so much in their creative styles as the way they lived, and despite obstruction and rejection, they were determined to be professional artists creating remarkable bodies of work. Whenever my confidence has failed me, it has been the example of women like Ida Kar who have given me the strength to survive and continue.

You note that there were very few women photographers in the 60s and 70s. Can you tell a bit about what it was like breaking into the “old boys€ club? 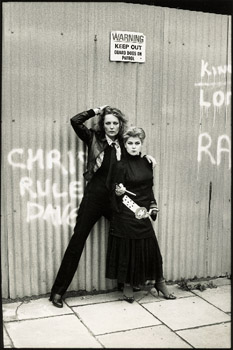 CC: No, No, No, correction! It is not me but others who talk about there being ‘few female’ photographers. I am always at pains to point out that considering the socio-political restrictions that women existed under in the past it is heroic how very many women photographers there were! Just because these woman are not ‘taught’ or generally known doesn’t mean they did not/do not exist.

And no, I did not ‘break into the “old boys€ club’. Firstly, in honor of all women in the past who have struggled politically to give me all the legal rights that I now enjoy, I have always called myself a feminist. The notice Feminists Not Allowed is nailed above the door of the ‘old boys club’. Secondly, standing outside and working outside a boys club is a useful strategy because in the long run such exclusionary clubs become redundant!

How is it different today for women photographers? Are the barriers more subtle?

CC: One of the great triumphs for women over the last fifty years has been the right to earn money and be professional. As a teenager (with an upper class background) it was drummed into me that it was ‘not lady-like’ for women to work or earn money and even if I did, I would have to give it all up when I got married. Perhaps this is why, when I was thirteen, I confided to my diary that I would never get married!

I’ve learned many lessons from professional men-especially what it takes to maintain a position in the work place. If there are barriers for women today, and there are, then they are mainly psychological. A lot depends on how prepared a woman is to be competitive, ambitions, determined, self-serving, selfish, pushy and egotistic. Despite all the professional advances women have made today, sometimes women still find it difficult to feel as equally entitled as men to fight for work and recognition.

Do you feel that women photographers bring a special and different perspective to their work? 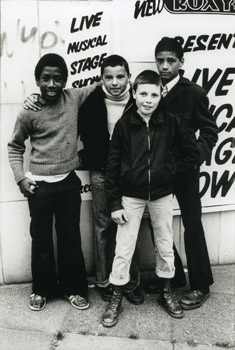 At times and in places when woman were not/are not allowed into the public space then we should not be surprised that their subjects are ‘domestic’.

Over the years when I have been outside sketching or photographing I have become practiced in a careful riposte to men who take it upon themselves to come up to me and say: You shouldn’t be out here alone – aren’t you afraid of being raped?

Ida Kar was born in Russia in 1908, educated in Egypt, then traveled to Paris where she began photography. She married Edmond Belali and together they began a photo studio in Cairo. It was there that she met surrealist artist and poet, Victor Musgrave. They married in 1944, and  in 1945 moved to London, where Kar began advertising as a theatrical photographer. Musgrave managed, and later owned a space called Gallery One. Together they became part of London’s post-war art scene.

Kar photographed many famous literary and art world personalities of the time, as well as people she encountered on the London streets. Her landmark exhibition at the Whitechapel Art Gallery in 1960 was the first one-person photography show to be held in a major London gallery. It marked the highpoint of her fame, and sparked debate in Britain over what exactly could be considered as photographic art.

In the late 1950′s, Kar travelled abroad, including trips to Armenia, East Germany and Cuba. She also photographed the famous of Britain, though by the late 60′s, her business had begun to wane. She died in 1974 in her Bayswater bedsit.

In 1999, Britain’s National Portrait Gallery purchased Kar’s archive, and in 2011, presented a major exhibit of her work.