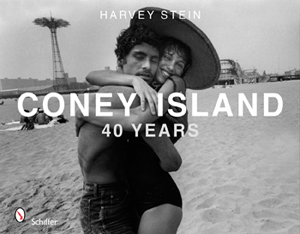 (From the Spring 2011 issue of IMPRINTS)

Harvey Stein is an award-winning photographer, author, educator, curator and lecturer with four other photography books to his credit. His photographs are in over 50 museum and private collections; his work has been exhibited in more than 70 one-person and 140 group shows worldwide. He teaches at the International Center of Photography and the School of Visual Arts in New York City.  His newest book, Coney Island Forty Years, contains 214 black/white photographs taken from 1970-2010. It is available from Schiffer Publishing Ltd.

K SMUL:  Tell me about your photographic approach:

H STEIN: I love photographing people. So on the street I’m always looking for interesting situations and people. My approach is to engage them directly, close up and wide angle. My long lens is a 35mm, I mostly use a 21mm lens. I talk to my subjects, get to know them for a minute or two, and photograph them in an environment and context that the wide angle lens provides, hoping to reveal something about them and myself.

K SMUL:   You have documented life in many different countries in your work, including Mexico and Italy for over ten years and various cities in the US. Are you interested in capturing a unique sense of place for each area or are you more interested in universal themes?

H STEIN: I’ve also photographed in Ecuador for the last four years, Peru last year, and I recently returned from a trip to Laos, Cambodia and Thailand. I think my themes are universal, obviously I bring my sensibility and outlook with me everywhere I go so my images are similar no matter where I am. That is, involved with people and how they behave close-up.

K SMUL: I understand that you were very involved in the new Coney Island book design. What elements were most important to you?

H STEIN: I want the book to be as “experiential€ as possible, almost to surround and involve the viewer with images. No spread has more than two photos. I wanted most photographs to bleed to the edge of the page. I wanted to minimize white borders; the effect is both lively and engaging.

The book also contains a timeline that is a novel feature, especially for a photography book. The timeline runs from 1609-2010, and was written by the well known former Brooklyn Borough historian John Manbeck. I asked a friend and long-time Coney Island figure, Lola Star, to write the introduction. Lola owned a roller rink on the boardwalk for two years and still runs one of only two boardwalk businesses to survive the current gentrification.

K SMUL: Both your Coney lsland books contain wonderful portraits of the many spirited locals and visitors to the area. Did you feel there was any change in the makeup or openness of the subjects you photographed over the forty year time span?

H STEIN: No. The people are still quite approachable. I think people open up more at Coney Island than if you met them on the street. They feel freer, happier, more relaxed at the beach and at the amusement area. Also, people are used to being photographed there. The people at Coney these days are hipper and younger, and probably more well off then when I began shooting in 1970. Then it was more ethnic and poorer, much like the city itself.

H STEIN: These are tough questions. I have always preferred black/white photography to color. For me, black/white is more personal and abstract. Color can be more picturesque, more about color than content. While photographing at Coney Island between 1970-2000, the place was quite edgy, sometimes dangerous. I think black/white suits Coney Island’s mood and ambiance better than color. That my first Coney Island book, consisting of 94 images from 1970-1997, is all color is really the choice of the editor who wanted to do a color book. I was fine with that, excited to get some color work out into the world. The new book is more my selection and interest, and the images are completely different than the first book. Because it’s black/white, Coney Island 40 Years is more intense, more gripping, might I say, than the color book. At least for me. It’s hard to say how the film choice will affect the viewer.  My hope is that viewers will respond positively, of course.

KSMUL: What do you think you gain/lose in each film choice, if anything?

H STEIN: With black/white images, I gain intensity, and I think involvement. In black/white, it’s more moody and revealing and more about history, the past, nostalgia, and memory.  Black/white helps to speak about what Coney Island has been for the past 40 years.  I lose the hallucinatory color that Coney Island sometimes provides. The color is warmer than black/white, less personal and perhaps more entertaining. Again, on balance, I prefer black and white to color, any day.

K SMUL: In your notes from your previous book on Coney Island, you write that the area “still has an irrepressible optimism about its future.€ Do you still feel that way?

H STEIN: That was about 13 years ago, and we are still awaiting that future, but the future is closer than before.  It was a down and out area in the 1970s and 80s and even into the late 90s. It had a dangerous but funky vibe. This past year, though, the attendance numbers at the beach and amusement parks were greater than in the last 46 years.  In fact, it is getting difficult to photograph because the beach and boardwalk are too crowded in the summer.  A new company has a 10-year lease on the boardwalk and has added 19 new rides, including a spectacular aerial ride. The new buildings and park attractions are wonderful but at the same time, the area is losing historic buildings. Rudy’s Bar, which opened in 1934, for example, is being forced to close. The “Shoot the Freak€ attraction closed this past winter. Obviously, this gentrification is good and not so good. I just hope Coney Island holds on to its edge and history.

K SMUL:  Where can we find you next?

H STEIN: I have workshops coming up at ICP, the Photographic Resource Center, and many other places. To see the full schedule and more of my images, please visit my website www.harveysteinphoto.com. And I have at least six new books ready to go; just have to find publishers for them.