From the beginning PWP has had some very good friends. The guest speaker list from the 1981-82 season includes Ruth Orkin, Arlene Gottfried, Arlene Alda, and Maggie Sherwood of the Floating Foundation of Photography. Below are Dianora Niccolini’s notes for the first PWP board and outside advisors, along with a later list of people who served. It is impressive, and includes Kathryn Abbe, Sonja Bullaty, Frances McLaughlin-Gill, Lilo Raymond, Maggie Sherwood, Erika Stone and Via Wynroth.

Notes for the first PWP Board and outside advisors (left & center); list of people who served as advisors (right)

Via Wynroth was the first Director of Education at the International Center of Photography, and was extremely forward in her thinking and hiring practices. She had a huge impact on a generation of photographers, and supported organizations that supported them, including PWP. She was an early advisor, and a warmly received guest speaker who shared her work and thoughts about her life and career (PWP Newsletter below left). When she passed away far too soon from cancer, she was fondly remembered in the Fall 1995 issue of The PWP Times (below right). Her friends, including PWP members Dianora Niccolini and Meryl Meisler, still speak of her today; hers is a rich legacy that runs deep in many hearts. 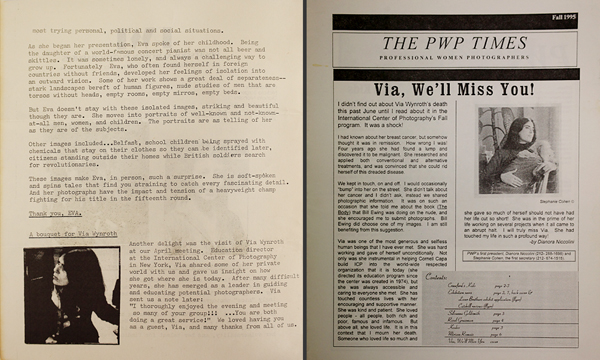 Danielle Hayes was the founder of PWP. Concerned the 1975 FIT exhibition Breadth of Vision: Portfolios of Women Photographers wasn’t getting enough attention, she called participants together for a bootstrap publicity campaign. It was from this group that PWP emerged.

This was the lady who drove a truck into Rockefeller Center to get attention for her book concept, Women Photograph Men. She got that attention and more: a deal with William Morrow & Company. The  1977 book was historic, with 100 images of men by 70 women photographers, including Arlene Alda, Barbara Gluck, Joan Liftin, Mary Ellen Mark, Barbara Morgan, Martha Swope, and Suzanne Szasz. It also contained a half folio of color photographs, unusual for the time, and an introduction by renowned film critic Molly Haskell. 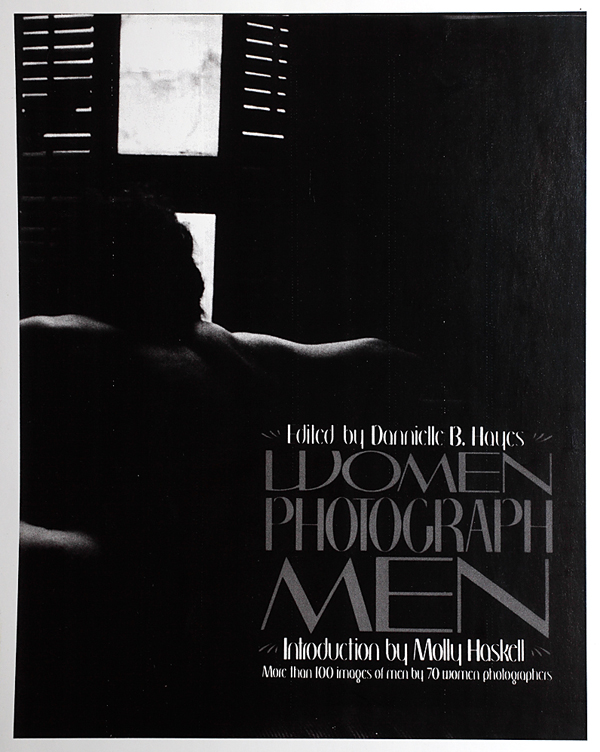 Not all the photographers who gathered at Hayes’ apartment for these first meetings were included in the book, so she graciously bowed out as leader of the “yet unnamed PWP.” She went on to a distinguished career as a freelance photographer, writer, illustrator, and designer. But a list of Hayes’ clients (which includes Time, Inc., The New York Times, and the National Geographic Society), or the places where she’s taught (Canon Creativity Workshops, Simon Fraser University, the New Jersey Institute of Technology), fails to indicate the wealth and richness of her ideas or the generous way she views the world. 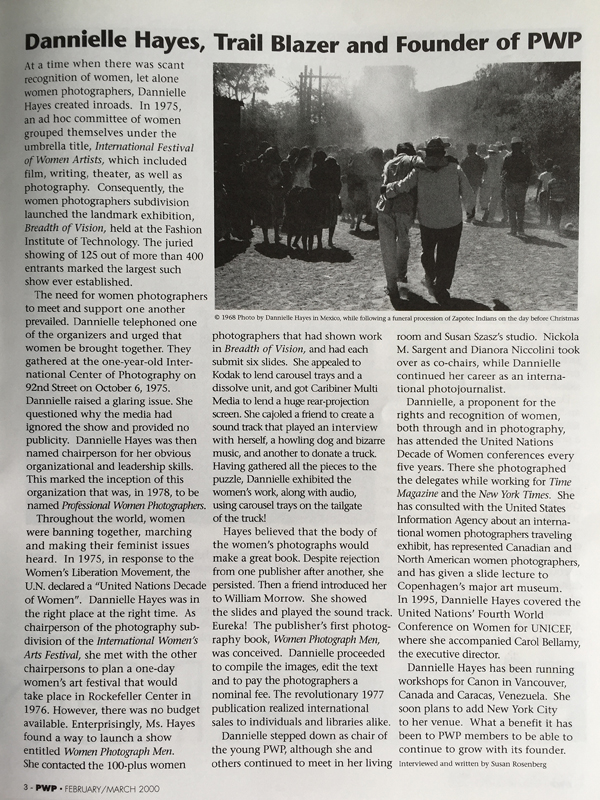 Her outlook is truly global. She once approached J. Walter Thompson, trying to put Kodak and UNICEF together, and has worked in many countries, including South Africa, Niger, Uganda, Cameroun, Senegal, Ethiopia, Tunisia, Indonesia, Jamaica, Cuba, Peru,Venezuela, Argentina and Canada. Equally impressive is her affiliation with and work on behalf of a wide range of worthy causes, including CARE, UNICEF, the United Nations’ Women’s Conference, Helen Keller International, and the 2010 Winter Paralympic Games, for which she felt a special fondness.

A few years back Hayes suffered a massive stroke, but recovered. Currently she is on a cruise, but before she left, told friends not to email till she got back because she was too busy with other things. For Dannielle Hayes breadth of vision isn’t just the title of a show that came and went, it very simply is a way of life.