In art, men have always gazed at women, but by the 1970s women were looking back, and not necessarily in the eye.

Dianora Niccolini, PWP’s first president, is famous for her male nudes. She was born in Florence, Italy, where the human body, male and female, is glorified publicly in the statues of Michelangelo, Donatello, and Ammannati, often in very large sizes.

After World War II, her family came to America, and she wound up at the Germain School of Photography, where she was the only woman in the class. Many of the students were Korean War vets, and “always got the pat on the back.” Which was okay till she went looking for a job and couldn’t find one. One photo agency told her straight out: “ “We won’t hire women. We’ve never hired a woman as a photographer.”

Eventually she found work at Cornell Medical College, sweeping up after the male photographers, the moved to Manhatten Eye, Ear & Throat Hospital, then to Lenox Hill where she founded the medical photography department, then to St. Clare’s where she did the same.

Along the way Niccolini did some female nudes, then embarked on a series of male nudes, which was unusual for the time and pre-dated Robert Mapplethorpe by several years. In 1975, she had a show of these at the Third Eye Gallery in Greenwich Village. It was favorably reviewed by Gene Thornton of the New York Times who wrote, ”Dianora Niccolini comes about as close to idealization as is possible in photography.” And Joanne Milani of the Florida Museum of Photographic Arts where some of these images have been exhibited, said: “in these photographs, Niccolini shows not individual men but archetypes…. They are like the figures the ancient Greeks placed on their temples to represent the sun god or the god of the oceans. As such, they are mythic embodiments of nature’s powers.”

Other women were also moving in this direction. A late 1970s or early 80s newsletter describes a talk Vivien Marachevic gave at PWP: 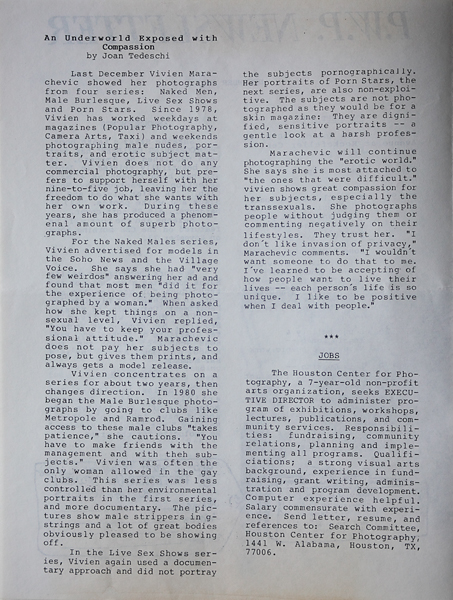 “For the Naked Males series, Vivien advertised for models in the Soho News and the Village Voice. She says she had ‘very few weirdos’…and found that most men ‘did it for the experience of being photographed by a women.’” 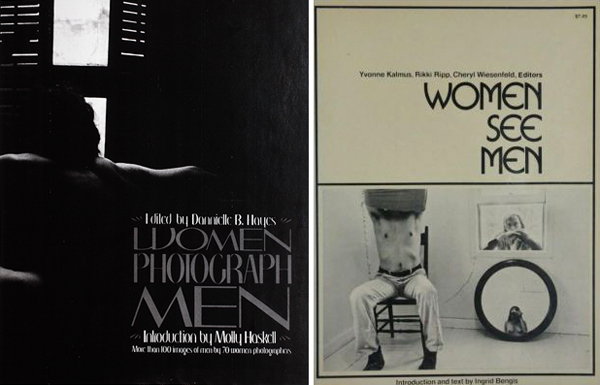 PWP’s founder, Dannielle Hayes, put together one of the early anthologies of women photographers called Women Photograph Men. Despite some heavy hitters like Mary Ellen Mark, Barbara Morgan, and Martha Swope, there was deep concern on the part of publisher William Morrow over the male nudity. Patt Blue’s picture was closely examined to figure out whether a diffuse line was a man urinating or a stream of sunshine. The book came out in the fall of 1977 to great reviews and no lawsuits. A different anthology called Women See Men was published the same year by McGraw Hill. Something was in the air.