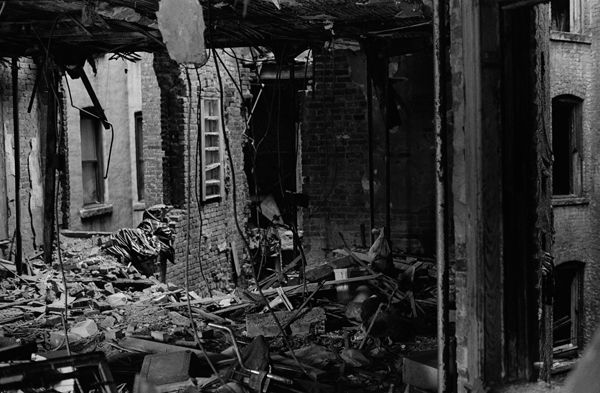 Before shimmering condos rose on every corner, before Donald Trump sought higher office and everyone had a camera on their phone, a group of gifted photographers–real photographers–prowled the urban jungle. Four of them–Amy Arbus, Alan Kleinberg, Ash Thayer and Andre D. Wagner–are featured in an exhibition at the OUTLET Gallery called Hit the Street. 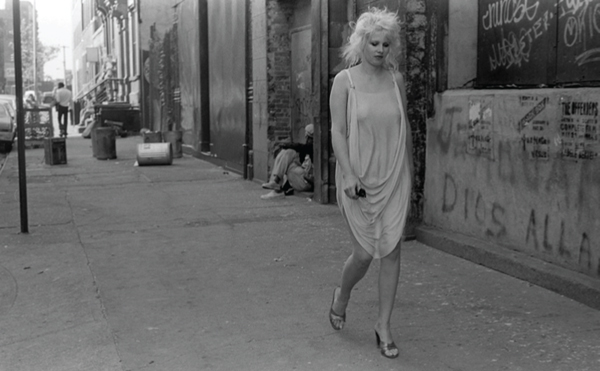 Each photographer selected by curator John Silvis “represents” a decade, and each is known for their deep connection to the people and places they shot. In the 1970s, Alan Kleinberg worked as a hairdresser for fashion magazines like Vogue and Mademoiselle, where he was exposed to the artistry of Richard Avedon and Irving Penn. A friendship with Saul Leiter helped develop his keen eye for the street, where he captured regular people and glamorous stars of the New York avant garde running errands and waiting, like everyone else, on line. Stretching behind them is the seedy set of 1970′s New York where ash cans overflow and buildings crumble. 14th Street, not yet ready for its closeup, is graced with cheap, schlock-filled stores and tattered awnings. No hirsute hipsters clutch Mocha Macchiatos or hustle to the L, which was anything but the coolest train on the planet. 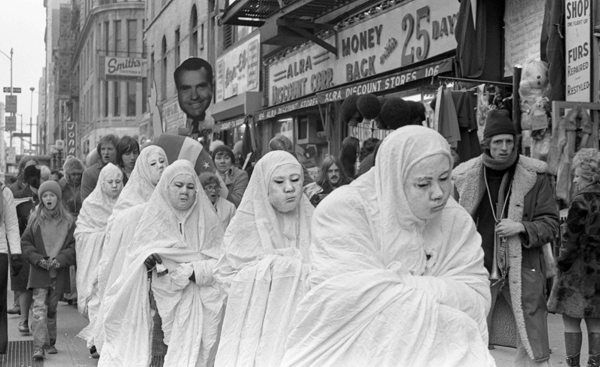 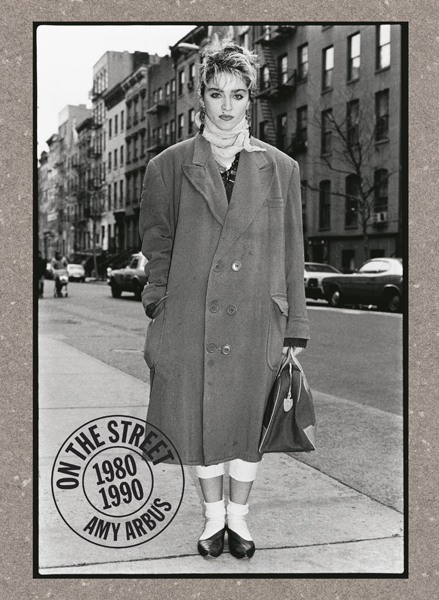 Madonna ©Amy Arbus (Cover of Arbus’ book “On The Streets”)

In the 1980s, as a fashion columnist for the Village Voice, Amy Arbus captured the punk/glam/mod rockers and wannabees as they strutted their outrageous stuff in lower Manhattan. Like all great street photographers, Arbus is blessed with a demotic eye, and gave fabulous nobodies the same attention she accorded stars like Madonna and The Clash. It is not wealth or bold face names that count, but imagination and personal style. I experienced something of her grace firsthand when she attended the opening of a small show she juried in Brooklyn. Posing for pictures, mixing with guests was a small gesture that spoke large of character and outlook, and meant a great deal to those involved. 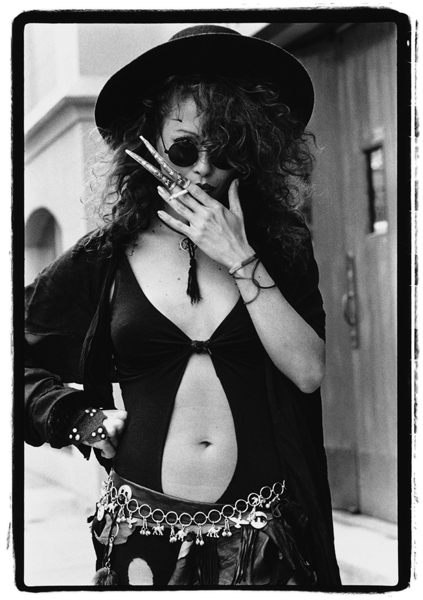 Ash Thayer lived on the Lower East Side in the 1990s when it was a no man’s land of abandoned buildings, drugs and violence. Her saturated prints are rich with the struggle and grit of squatter life; like Technicolor stills from Rent, they capture the surrealistic youth experience of that time and place, forever gone. 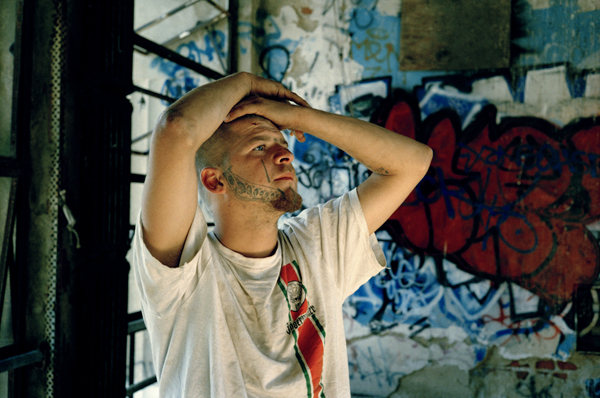 Thayer’s 20×24 inch images raise their woe if not quite to the heroic, to the larger-than-life scale all youthful memories have, capturing from a unique insider perspective, a moment before the great tsunami of gentrification began. These beautiful prints pull you in, generating a strange nostalgia for a city that has all but passed. The streets many have been rougher, but seemed to offer more options, certainly for photographers, than the shined-up, G-rated versions we have now. 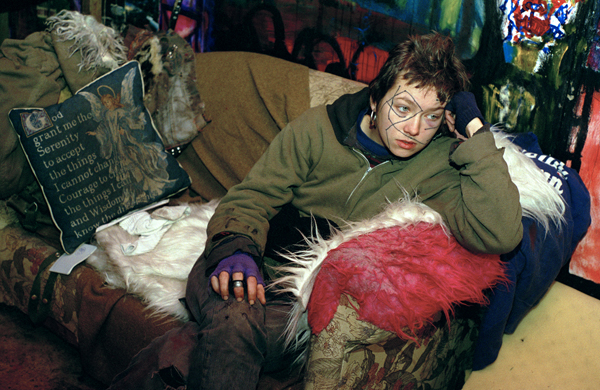 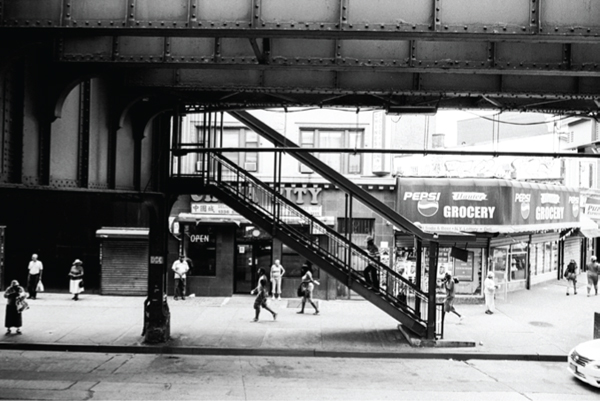 Andre D. Wagner walks neighborhoods where the glitter doesn’t reach, creating somber, elegant compositions that are so New York, it’s hard to believe he comes from Omaha, Nebraska. Now Brooklyn-based, he documents with film and gelatin silver the changing flow of American life. The resulting images hover in a timeless space, connected formally to the work of classic photographers like Berenice Abbott and Dorothea Lange, the clothing, cars and cell phones the only hints to their more recent vintage. They are taken not by someone outside looking in or passing by, but by someone walking amongst, quietly observing streets where ordinary lives play out and still matter. 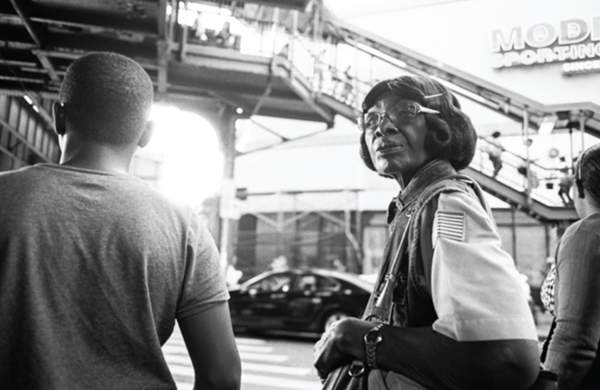 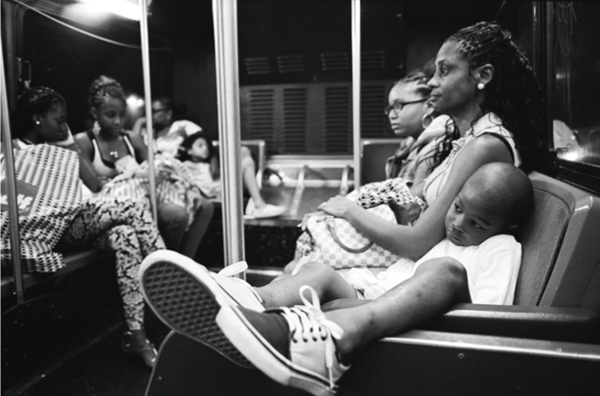 Though their moment has passed, the players of these street dramas endure through the work of four living legends. They show New York as it was–colorful, open, fearful and free–congering dreams of what was lost and might have been, and what still might be.

Hit the Street will run through November 1st at the OUTLET Gallery, 253 Wilson Avenue, Brooklyn, NY, near the Knickerbocker stop on the M Train. The gallery is open Saturday and Sunday from 12-6 PM or by appointment. Photographer Andre D. Wagner will talk about his work on Sunday, November 1st at 4:00 PM. For more information, contact outletfineart@gmail.com.