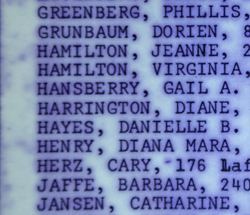 Mimeographed List of the Breadth of Vision Exhibition Photographers

BOV: The Life - An Appreciation of Dannielle Hayes

As we know, in the beginning there was a show. Fashion Institute of Technology, 1975, Breadth of Vision: Portfolios of Women Photographers, a historic exhibition out of which PWP developed. But there was another vision going on, a life and personal outlook.

Last spring I arranged to have coffee with PWP’s founder, Dannielle Hayes. There had been talk of an oral history, work on the archives, but the meeting was left casual, the topics open.

We met at a bistro near her apartment in the East Village. With close-cropped blond hair and black frame glasses, Hayes was stylish and smart, but without the “better than€ attitude that sometimes comes with accomplished New Yorkers. A sense of warmth and humor were immediately apparent; what started as a quick cup of coffee turned into a leisurely lunch.

Right here I need to come clean: the notes I took during the first twenty minutes are lost. Okay, not really lost. Nothing ever really gets lost in the house; it just goes missing for a very long time. Let’s just say they are not presently at hand. But I had my Flip camera and halfway in, begged to record. We struck a deal: if I pointed the lens away so she wouldn’t be caught chewing, I could record sound. Here is a sampling from her amazing life.

Hayes was educated at the University of Victoria in British Columbia, and Cooper Union in New York. One of her early jobs was at Fairchild Publications where she was “illustrator and writer and photographer and chief bottle washer.€ A wide range of responsibilities helped develop a wide range of skills and contacts, as well as a broad outlook. Creativity didn’t end when the shutter snapped shut; photography didn’t exist in a vacuum.

In fact, the meetings of the Breadth of Vision photographers grew out of Hayes’ concern that the show wasn’t getting enough publicity. She instinctively knew that women had to help themselves because at the time no one else would. They launched a bootstrap campaign that included taping signs to lampposts, and awareness of the show grew.

A year later, thinking way outside the box, Hayes organized a slide show called Woman Photographs Man that was shown on the back of a truck in Rockefeller Center. This attracted attention (which she primed by reaching out to publishing contacts), and she was offered a contract by William Morrow & Co. With Hayes as author/editor, Women Photograph Men was published in 1977. It was a historic book, with 100 images of men by 70 women photographers, including Arlene Alda, Barbara Gluck, Joan Liftin, Mary Ellen Mark, Barbara Morgan, Martha Swope, and Suzanne Szasz. It also contained a half folio of color photographs, unusual for the time, and an introduction by renowned film critic Molly Haskell.

Hayes was deeply involved  with the project, laying it out at William Morrow, gathering and editing the photographers’ bios, and securing the top photo printer, Morgan & Morgan. “William Morrow tried to send me to some other printers and I had to look at their work,” Hayes recalled, ”and I said no,…this is not good enough. If I’m going to put my name on this book, I really want the top printer. And I…called Barbara up, [photographer] Barbara Morgan, and said ‘look, this is really important,’ and she agreed, so it was actually Morgan [& Morgan] who printed the book.€

Along with the general pressures of publishing, there were other concerns. Was the man in Patt Blue’s picture urinating or was it a stream of sunshine? Would people be scandalized by male nudity? William Morrow’s lawyer asked Hayes to sign a liability clause stating that she, not the publisher, would be responsible in case “a little blue-haired lady from the Midwest€ sued. Hayes responded that this was exactly the sort of person who would enjoy the book most, and refused to sign. Women Photograph Men came out in the fall of 1977 to excellent reviews, including one in The New York Times. No lawsuits were ever filed. Interestingly, another book with different editors, Women See Men, was published in the same year by McGraw Hill; both books had shows at the International Center of Photography.

There was also the matter of getting a photo release from Moondog, the famous street musician who was pictured in Women Photograph Men. For many years he favored a spot on Sixth Avenue at 53rd Street, but suddenly disappeared. The publishing process went on without him, and he later resurfaced, having spent ten years composing in Germany.

Not all the women photographers who gathered at Hayes’ apartment were included in the book, so she graciously bowed out as leader of the “yet unnamed PWP,” and went on to a distinguished career as a freelance photographer, writer, illustrator, and designer. But a list of Hayes’ clients (that includes Time, Inc., The New York Times, and the National Geographic Society), or the places where she’s taught photography (Canon Creativity Workshops, Simon Fraser University, the New Jersey Institute of Technology), does not even begin to indicate the wealth and richness of her ideas or the generous way in which she sees the world.

Her outlook is truly global. She once approached J. Walter Thompson, trying to put Kodak and UNICEF together, and has worked in many countries, including South Africa, Niger, Uganda, Cameroun, Senegal, Ethiopia, Tunisia, Indonesia, Jamaica, Cuba, Peru,Venezuela, Argentina and Canada. Equally impressive is her affiliation with and work on behalf of a wide range of worthy causes, including CARE, UNICEF, the United Nations’ Women’s Conference, Helen Keller International, and the 2010 Winter Paralympic Games, of which she spoke with a special fondness. The very best way to understand Dannielle Hayes is through her photographs. On her website is a movie made of her pictures from the 2010 Winter Paralympics. As a photographer, she doesn’t flinch. She simply records, without an ounce of voyeurism, and through her perception of these athletes as beautiful, gifted and heroic, we see them that way too.

There’s a saying in the piano world “you play what you are.€ Whether you’re uptight, kind, generous or mean, it all comes out in the music you make. When you look at Dannielle Hayes’ pictures, you can tell that she is filled with grace and courage and light. Hers is a beautiful life.

Her legacy? Inspiration and kindness, determination and can do. A continuing sense of awe in the face of the world and its people, and the fates that sometimes befall them. For better or worse, organizations take after their founders. In Dannielle Hayes, PWP got lucky because she was a pretty terrific place to start. For her, breadth of vision is more than the title of a show that came and went. It is very simply a way of life.