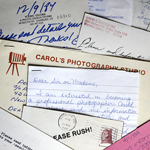 In honor of Women’s History Month, we are updating a post from a few years back that looked at the requests for information about PWP that came from women in the 1970s and 80s. If you read these letters closely, you get a sense of the  isolation they felt in what had been a male-dominated profession.

In the archives of Professional Women Photographers, there is a file of letters from women in the late 1970s and 1980s seeking information about the organization. They came from all over, from Illinois, Arkansas, Texas, even Italy. Some were handwritten, others were typed. Because there was no email, they were all on paper–notebook sheets, cheap postcards, fine bond. All wanted the same thing: information on Professional Women Photographers! They were eager to learn about and join an organization of women photographers–a novelty at the time, in a time that was not so very long ago. 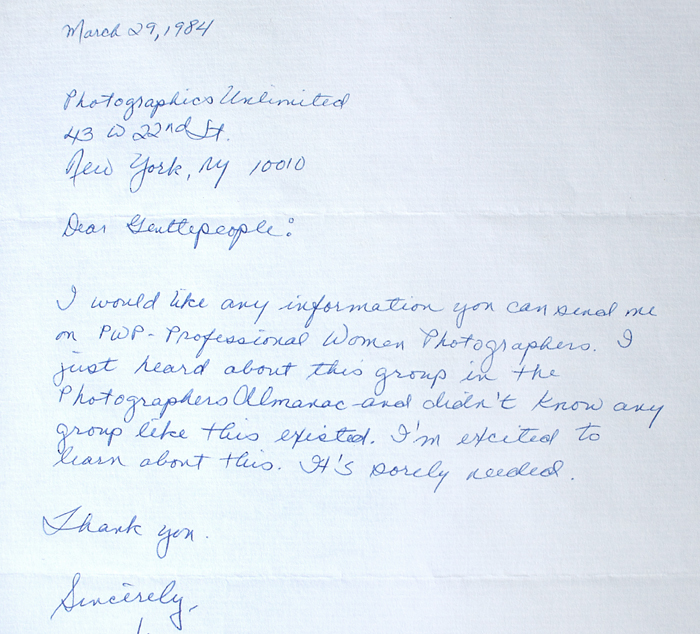 Reading between lines that were handwritten or typed (on a typewriter!), you get a very strong sense of how things were for women in the field, or those trying to enter the field, in the 1970s and 80s. There have always been women in photography, but most women never regarded it as a viable career. When they did, they very often found themselves the sole female photographer in their geographic area, or were actively discouraged by men established in the field. They were desperate for a support network for projects and careers, an embracing sympathy that only comes from those who are going through the same thing.

“I read about your organization… 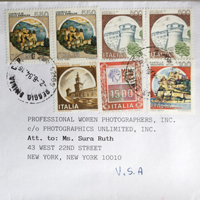 In the 1970s, when PWP was founded, there was an excitement and energy in the air. Cultural movements that began in the 60s–desegregation and women’s liberation–were coming to fruition. They weren’t just ideas anymore, they were becoming realities. Colleges were integrating and going co-ed. Women were leaving the kitchen for the corporation, and entering professions that had long been off limits or male-dominated. There was a spirit of “can do” and “why not?” The climate was set for change and it was happening. If the 70s lacked the polish of the 50s and the fervor of the 60s, they offered real opportunities as fields previously restricted opened up.

Sometimes people needed a little help, including artists and photographers. A lot of small organizations and co-operative ventures were born: the A.I.R. Gallery, Soho Photo Gallery, The Floating Foundation of Photography, and Professional Women Photographers. These efforts were grass roots because they had to be–there were very few established organizations where art photographers could exhibit, and for women artists and photographers to turn to. It was uncharted territory: a new frontier with a new, very creative type of pioneer.

Looking at these letters, many typed on a typewriter with a single courier font, you realize that information wasn’t an easy click away as it is today. The Internet was still the ARPANET, and these women had to buy and read photo publications, write letters, and mail them off. They had to want more for themselves–more options, opportunities and support. Joining a women’s photographic group was a huge step for them, but a logical one.

Throughout Women’s History Month, PWP is going to publish some of these letters and other documents from its archives. Though small in nature, they speak to larger truths. Isn’t that the history of women? Who through quiet strength and hidden lives have sustained others and made so much possible?

It’s good to remember that today’s opportunities were paid for by others’ struggles. It is good to honor those who came before, to understand the tenor of their time, and to remember that the work is not yet finished, that around the world many women still lack even the most basic freedom.