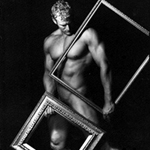 In 2002, the U.S. Department of Justice paid $8,000 for drapes to cover the bare-breasted Spirit of Justice statue that stands behind the podium where news conferences are held. It was the time of Bush, Ashcroft, and the resurgent Right. In Florence, Italy, where Dianora Niccolini was born, there is none of that. The body, male and female, is celebrated publicly in the statues of Michelangelo,  Donatello,and Ammannati. Many of these don’t have carved drapes, let alone the fabric kind. But there is no shame; the human form is acknowledged and revered.

Her mother was a beautiful American spending her junior year in Florence when she fell in love with Niccolini’s father, who was born a marquis. Though her family opposed the match, they wed, and in the early years, had a great deal of wealth. Dianora, born in 1936, had many toys, including a dollhouse with running water.

Gathering Storm
But Fascism was spreading across Europe, and when Niccolini was six, war came to the city of Leonardo and the Renaissance. Nazis marched by her school and terrible bombings began. “It was rumored that the Americans bombed in the morning while the English bombed in the afternoon, before teatime, and the Germans bombed at night,€ she wrote. “The bombings at night were the most terrifying….we were…always on the alert for the sound of sirens, but most of all the sound of planes. If we heard the planes, we knew they were near. Then we would all run out of our homes into the open fields.€

Where vipers were rampant. There was also the stench of rubble drenched with lye (to prevent cholera), and IEDs which, sadly, are not a recent invention. Anything, she said, “a fine looking pencil, a toy, a shiny object, especially if found on the street, could and often was a booby trap. Countless people lost their limbs, eyes and lives this way…and many were children.€ Walking with her mother one day, she saw another mother and child ahead. They stepped onto a bridge and were blown up. The mother died instantly; the child, ripped apart, died a few days later.

But if there were horrors, there were also lessons in the power of shared endeavor. Since buildings were prime targets for bombs, the community decided to build alternative shelter. Local nuns offered their property, and everyone pitched in. Niccolini recalls seeing “nuns, women from the neighborhood, old men, and my mother digging with shovels and picks. All the young men were at war and the equipment at hand was nothing more than gardening tools.€ But the shelter was effective and saved many lives. It was also an equalizer, utilized by rich and poor alike, including one wealthy women who arrived with her pots and pans.

There was also a refugee smuggled into the Niccolini home in a flour sack, and the adventures of her father who eluded the Germans by posing as a priest, and came home disguised as a nun.

New World, New Life
When the war ended, Niccolini’s family came to America, went to Panama (where she used her spending money to buy a shrunken head), then settled on Long Island. She moved to New York City, attended Hunter College, but wanted to be an artist. She tried her hand at textile and floral design, but neither took. The careers traditionally open to women-secretarial and teaching-didn’t interest her. Finally, stung by her mother’s comment “I can’t believe I raised a failure,€ she took up a medium where individuality and creativity are assets. 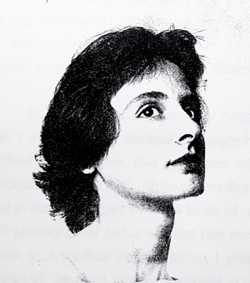 At the Germain School of Photography, she found herself the only woman in the class. Many of the students were Korean War vets, and “always got the pat on the back.€ This was okay till she went looking for a job and discovered the economic repercussions of sexism: no one would hire her. One agency told her: “ “We won’t hire women. We’ve never hired a woman as a photographer.€

Eventually she found work at Cornell Medical College, sweeping up after the male photographers for $45 a week. Even in that capacity she was challenged: quizzed relentlessly by her supervisor about the chemical composition of various developers. It made her even more determined to succeed.

She moved on, first assisting Don Wong at Manhatten Eye, Ear & Throat Hospital, then to Lenox Hill where she founded the medical photography department, then to St. Clare’s where she did the same.

Hot Sexy Men
Through it all, she pursued her own vision, encouraged by Arthur Fellig, aka Weegee, who she met in Washington Square Park. She shot a series of female nudes, then a series of male nudes, which was unusual for the time and pre-dated Robert Mapplethorpe by several years. In 1975, she had a show of these at the Third Eye Gallery in Greenwich Village. It was favorably reviewed by Gene Thornton of the New York Times who wrote, ”Dianora Niccolini comes about as close to idealization as is possible in photography.” And Joanne Milani of the Florida Museum of Photographic Arts where some of these are currently on display says “in these photographs, Niccolini shows not individual men but archetypes….They are like the figures the ancient Greeks placed on their temples to represent the sun god or the god of the oceans. As such, they are mythic embodiments of nature’s powers.€ 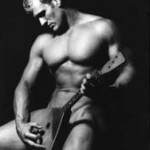 And there is something perfect and remote about these figures, as if they stepped off the side of the Parthenon into some dark empyrean and perfectly imagined space. And it is pretty well imagined because the actual space where many were shot is quite small. But as Niccolini says, “the only essential ingredients required to take any photograph are: light, a light sensitive material, and a camera – sprinkled with a little flexibility and a lot of imagination.€ There have always been two sides of Dianora Niccolini: the practical side that could photograph illness and deformity and produce 20 surgical films, and the dreamer who saw what wasn’t there, but could be. 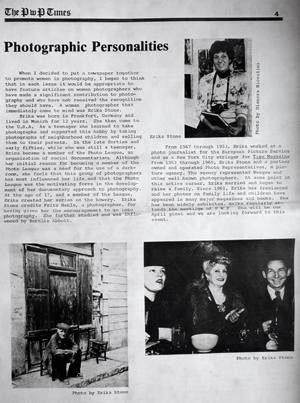 The internet has become such an integral part of our lives, we forget it’s a fairly recent development. In 1980, it was still a small network connecting academic institutions. If people wanted to communicate, they wrote a letter or picked up the telephone, a clunky device that hadn’t shrunk, become mobile or graphics-enabled. If you wanted to communicate more widely, you put out a publication, which is what Niccolini did, providing news for and about women photographers.

PWP Times was an eight page tabloid, with each issue dedicated to a famous, usually older, woman photographer like Lisette Model, Barbara Morgan, and Eve Arnold. Niccolini’s goal was “to highlight and honor women photographers who…opened the door, paved the way.€ (Soundbite of Niccolini on PWP Times & Women Photographers) 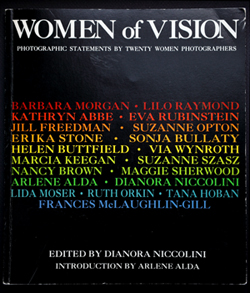 She also published two books, Women of Vision, one of the first anthologies of women photographers (1982), and Men in Focus (1983). Like many women, she had work and family burdens, including the death of her mother, and in 1984, stepped away from PWP.

Today Niccolini is an activist for many causes, always backing up her thoughts with action. But this is a women who never flinched, at shrunken heads, surgical subjects, or people who said “you can’t.” This is a women who was determined to become a professional woman photographer and did. She paved the way and made things easier for us. “Don’t chase money,” she said, ”do something that matters.”  She did, and we owe her a great deal.

Niccolini’s work has appeared in numerous anthologies, galleries and museums. She is represented by Throckmorton Fine Art, and an exhibit of her male nudes can be seen at the Florida Museum of Photographic Arts through January 8th, 2012.

(This post draws on interviews with Dianora Niccolini and material in the Archives of Professional Women Photographers, including her autobiography Self Portrait of an Uncommon Woman)

4 thoughts on “Of Myth and Men: The Photography of Dianora Niccolini”