Last night a photo queen graced PWP with her presence. Dressed in red velvet with flowing blue hair, Flo Fox, with her images, wit, and wisdom held the room at St. Paul the Apostle Church spellbound.

Fox began taking pictures in 1972, right after she “split from her ex.€ With money from her first paycheck as a costume designer, she bought an SLR and never looked back. She had been promised one earlier by her mother, “when you graduate ninth grade.€ But her mother died before this could happen. For any other person, this might have been a dream stopper, but Flo Fox is no ordinary mortal. But more on that later.

The important stuff is the pictures. They seem to flow out of her life like water from a spring, endless and seemingly without effort. There are scenes from Greenwich Village where she lived for a time, and scenes from Chelsea where she lives now. All are wonderful moments of everyday life that are anything but ordinary and all the more enchanting because they are real. There are pictures of shapely plastic legs poking out of a garbage can, a child chasing a bird, little girls balancing on a fence.

Maybe I should say here that Flo Fox has Multiple Sclerosis. She used to balance on the very fence she caught in the picture. But if she balances now in a different way, she is nonetheless very balanced. Maybe I should also mention that she was born blind in one eye, and has lost most of the sight in the other. That her limbs are numb and she rolled into the church last night on a scooter. Not the retro ones hipsters use on the streets of Brooklyn, but the medical variety. She also had a lovely and gracious aide in tow.

Which brings us back to Flo Fox and her pictures and how she treats people and how she lives and sees the world. She’s more than a trouper, she positively chipper! About everything! It’s contagious. Whatever mood you were in when you arrived, you went out on a high. And it was a complex high: not only was her personal story and demeanor inspiring, but so were her photographs. They were great, and alone would have made for a fine evening. But like I said, this was a special event. 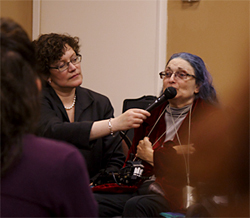 Flo Fox has some kind of transcendental flexibility going. She first “studied€ photographs when collecting old newspapers and magazines like Life and National Geographic for her mother. A photo of a trolley scene by Robert Frank provided a “Eureka!€ moment: seeing it she realized that ordinary scenes could be powerful subjects, worthy of study.

Fox carries two cameras at all times, and “just about every day I get a few.€ Actually, more than a few. She is currently going through the nearly 120,000 negatives she printed herself in the darkroom, organizing them on the computer where she also communicates with her many friends on Facebook.

Fox is both witty and earthy, both in pictures and words, and there were a few nude self-portraits. “I was a hot chick,€ she said, and a hot chick she remains. After the presentation, she chatted with the many who flocked to her side and graciously consented to pictures.

Several were instructed to dig in her bag for an additional portfolio she wished to share, but were not able to find it. So she will have to return and work her magic once more. Her many fans eagerly await her return, this writer included.