What Becomes a Legend… 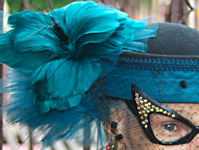 Every neighborhood has one, a character so unique that they earn a place in local lore. The one I grew up with worked in the drugstore. Behind the counter he seemed so normal. He was polite to customers, had deep knowledge of his field. But taped to the front of the pharmacy counter were those pictures….

There he was, in a bathing suit by the river, flanked by reporters and police, his arms wrapped in chains-great massive chains, the kind used to secure elephants under the big top. Newspaper clippings attested this was a habit. Was it safe to buy medicine from him?

It was. He was kind, competent and caring. He helped older customers in the store and took an interest in people’s lives. But part of him liked to break loose and do Houdini-style magic with the media present. Back then, he was a legend in Stuyvesant Town and Peter Cooper. Today, he would have a website and hundreds of followers on Twitter.

There have always been colorful people in New York. Some take to the river, others to the streets, bringing with them a sense of joy, excitement and personal theater. But high rents and rough economic times have forced some to cut back. Many have relocated to friendlier environs or toned down (at least by their standards). Here are a few NYC legends seen through the eyes of several women photographers. A little hint: don’t be fooled by the clothes. If they have large imaginations, their hearts are even bigger. They’ve touched many people and inspired more than a few. 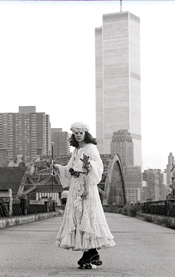 Rollerena
It doesn’t matter what his real name is, or if he really came from Gravelsnatch, Kentucky, though he swears there is such a place. For the person known as Rollerena, reality is a creative and highly flexible concept. Like a great actor carefully crafting a character for the stage, deep personal belief, consummate attention to detail, and appropriate costume outweigh all other considerations.

He’d always skated. That was a skill acquired early in life. But the persona had a slower, more careful and conscious evolution. Even his official name went through several iterations before it fit just right like an elegant glove.

The legend began to take shape in 1970. He didn’t care for the subways so decided to skate to work. The idea came to him not precisely in a dream, but when he was resting and spied his skates through a half open closet door. He practiced in Central Park and on the Upper East Side, and in 1971 appeared in the Gay Pride Parade as Rollin’ Skeets.

Then on September 16, 1972, he went into The Opulent Era, a shop that specialized in old Vaudeville clothes. “If you have a bathrobe with some glitter,” he said, “I’ll skate up and down Christopher Street.€ Everyone sprang into action. A gown was produced, then a straw hat and basket, and off he went. He skated into Dancing Danny’s, a bar at Christopher and Greenwich, and the place went wild.

A star was born. Requests for appearances followed. He would rest up after work, then head off with his outfit in a shopping bag. Sometimes he would change in the doorway of a co-op, startling the doorman. Then he “would be picked up at the Plaza Hotel in a limousine and driven to wherever I had to go.€ He was credited for starting the skating craze in New York, and was a favorite at Studio 54, where he always got in.

Rollerena’s wardrobe became ever more glamorous, and includes the Turtle Clutch, the Rose Fur Hat, (worn the night he danced with Nureyev at Studio 54), and the beloved Dingleberry Ring. A circus baton and bicycle horn are also favored items.

Though he no longer skates, Rollerena remains spectacular and has a busy social calendar. He enjoys meeting people and has inspired many. One was photographer Darleen Rubin who saw Rollerena flying down Christopher Street in the early 1970s. Pictures of their collaboration will be on display at the Jefferson Market Library September 7th through October 29th.

The Mayor of Grand Street 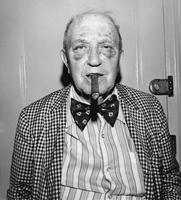 Photographer Meryl Meisler met Morris Katz in 1977 when he was out on the street greeting neighbors. He also put in appearances at the local police precinct and synagogue to keep people’s spirits up and to let them know he cared. He had to, it was his job. As the unofficial Mayor of Grand Street, he had responsibilities and duties to carry out.

If there a whiff of the carnival about him, one of his jobs during the Depression had been to guess people’s weights at Coney Island. He probably learned diplomacy there, and always had a ready supply of one liners (“I never lost my senses because I never had any”). Later he worked in the Garment District, but fashion didn’t seem to rub off: he freely mixed plaids with stripes, polka dots with zebras to create a distinctive personal style.

He might not have been fashionable, but he was always kind, handing out gifts and sweets to neighbors and children. He also shared a social worker with Auntie Mame, the real woman on whom the book and musical were based. Sometimes New York is a small town.

Mayor Katz passed away some time ago during a heat wave. He was in his 99th year.

A Haven for Artists 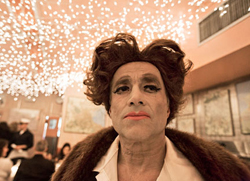 Born in France, Florent Morellet owned a bistro in the Meatpacking District that embraced all the vivid diversity New York has to offer: gay people, straight people, actors, artists, underground stars, movie stars, fashion designers, shady ladies of the evening and at lunch, local moms with children in tow. It was a place where creatives, really everyone, felt safe and could catch up on local news that was posted daily on the menu board. Pamela Greene discovered it while documenting the Meatpacking District, and always took an interest in whatever artistic project the staff or regulars brought out to share. If you went there, you became part of their friendly, creative tribe.

But Manhattan rents skyrocketed, and in 2008 Morellet was forced to close his restaurant. His concern lives on though his civic activism, and his creativity is channeled into his extraordinary imaginary maps.

Rich in plumage and visually arresting, these outsize personalities have inner strength and the courage to be themselves, even if it means standing or skating alone. They offer lessons in tolerance and friendship. They have many fans, and are fabulous inside and out. What’s not to love? Or take a picture of?