Born in Tel Aviv, Israel, Etty Yaniv holds BA in Psychology and English Literature from Tel Aviv University, a BFA from Parsons School of Design, and an MFA from SUNY Purchase. Her work has appeared in The New York Times, Village Voice, Newsday Magazine and The Nation, and been exhibited internationally at many galleries and museums including the Haifa Museum of Art, the Newark Museum of Art, the Torrance Art Museum, Purdue University, and Leipziger Baumwollspinnerie, Halle 14, in Leipzig Germany. She also writes about art, and is co-curator of Mapping Bushwick currently up at In-Case Art Projects. 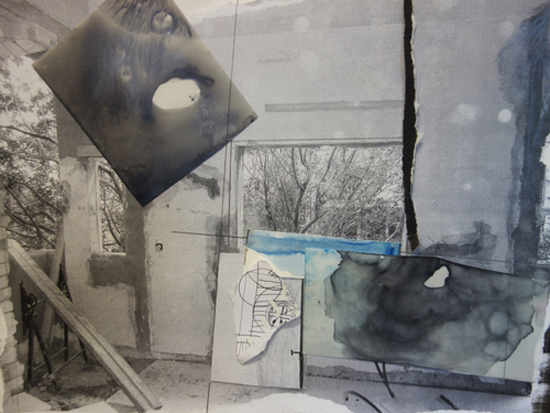 PWP: How and why did photographs make their way into your work?

Etty Yaniv: I’ve always mixed drawing, painting and photography because I’ve always had an urge to document moments and things in my immediate surroundings. It can be people going about their daily life in the city, or the changing light on sidewalks. Overall, I’m trying to capture the elusive moment of transition between “was,” “is,” and “next.”

I’ve taken photographs ever since I came to New York to study art at Parsons. I always carried two essentials in my backpack: a camera and a sketchbook. I would sit on a bench in Washington Square Park and draw for hours, then walk around and take pictures of people in the park and nearby streets. (I suspect I captured some shady business, but was clueless at the time!) In the early Nineties, I worked with a film camera, but now use a tiny smart phone with digital printout, though the idea is the same.

I was fascinated by photographs as objects, fusing them with layers of paint. Later when I began working with three dimensional forms, I kept this mixed-media sensibility, combining photography, paint, drawing, and everyday materials like plastic and paper. 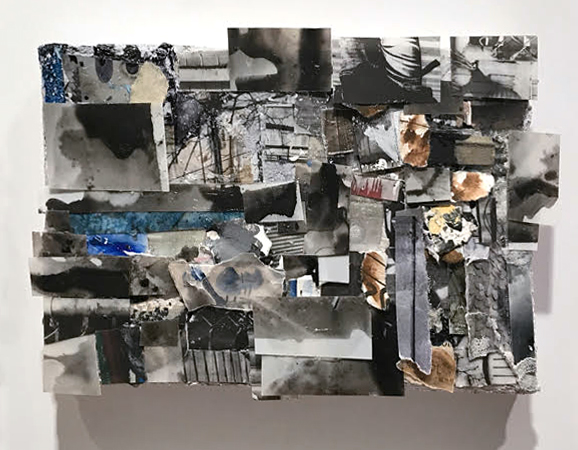 PWP: Do you use found images or those you take yourself?

EY: Both. I regularly take pictures on the way to and from my Bushwick studio, in the city, and when I travel. I love to capture people and moments.

For a long time I was obsessed with people walking, and took hundreds of shots in a certain corner of midtown at different times of day. The architecture of the skyscrapers served as backdrop for the people’s feet and their shadows. I’m fascinated by the fabric of the city, with its endless potential for stories.

Depending on the project, I also utilize found images. In a recent project, I used thousands of images from Google depicting displaced people from different parts of the world in diverse phases of history, and incorporated them into dimensional installations.

Documentation is central in my work, starting with personal moments in immediate surroundings, then departing and expanding to broader contexts. This shift between the personal everyday to socio and geopolitical narratives that affect (or are forced on) individuals preoccupies me. 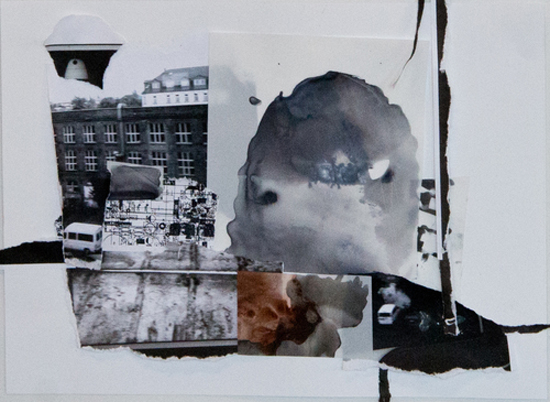 PWP: Talk a little about how you work with images.

EY: I have a large collection of digital photographs (and also those printed from film) categorized by subjects. I select the ones I want to use and print them on vellum or film, sometimes scaling them or using slight color manipulation, but mostly they are straightforward photos. Then I cut them into pieces. The fragmented images, taken out of context, are on the verge of being unrecognizable. I use thousands of these small photo fragments like puzzle pieces.

For me, each photographic image carries the possibility for a narrative. When I layer these into an installation, it’s as if they acquire a new life in a new story. I use the images as clues: they are essential to my own process of discovering the overall sense of a work, and hopefully function that way for the viewer as well.

For example, a few years ago I had an art residency in Leipzig, in the former East Germany that was a very rich and emotional experience for me. Every day as I walked from my room to the studio along a canal, I took photographs of architecture, willow trees and people, drew and wrote, documenting minute by minute my daily walks in this foreign city. This process resulted in a large scale elliptical wall relief (below), a site-specific column, and a collage series. In each of them, I juxtaposed the diaristic materials produced in Leipzig with photographs that documented renovation at my parent’s house in Israel. By layering them into highly elaborate and textured forms, I was able to reflect both memory and a sense of place.

For “On the Horizon,” the on-going painted collage series featured in Mapping Bushwick, I’m using photos from the city. Here too I fuse past and present, combining images from the time I arrived in NY with images that I take now. In some of the older fragments, you can even spot the small dates they used to stamp on pictures. 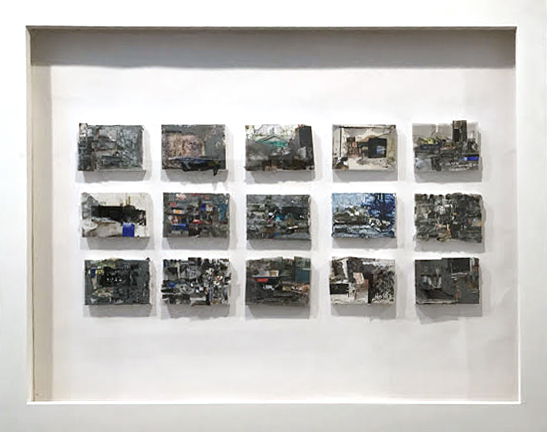 EY: In On Photography, Susan Sontag says that collecting photographs is like collecting the world, that the image is also an object. I think I’m using photography this way in my work. I also like Sontag’s notion of photography as “narrowly selective transparency.”

EY: Robert Rauschenberg and Anselm Kiefer were early inspirations. Cinema too, like the fragmentation and frames within frames in Michelangelo Antonioni’s films.