I was running through a gallery building in Bushwick when something bold caught my eye. It was work of Israeli photographer Adi Tarkay who is having his first U.S. solo show, Story of Three Halves at Fuchs Projects. 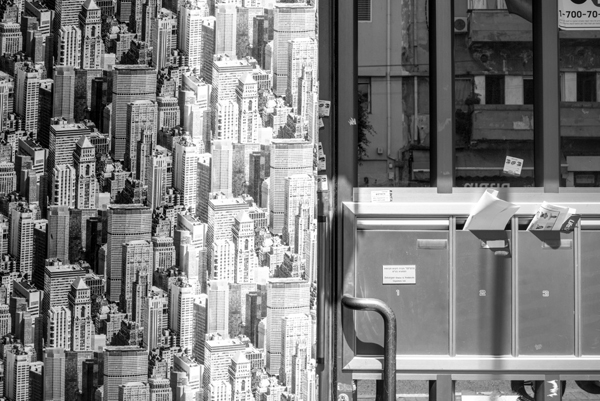 The photographs were technically dazzling–high contrast B&W on aluminum–and aesthetically intriguing. Each contained what seemed to be two very different images that functioned like separate panels of a diptych. I was told by the artist that no Photoshop was used, that on his wanderings through New York City, Tel Aviv, Tokyo, and Kyoto, he had discovered and captured these strangely divided scenes in a quiet and very personal decisive moment. 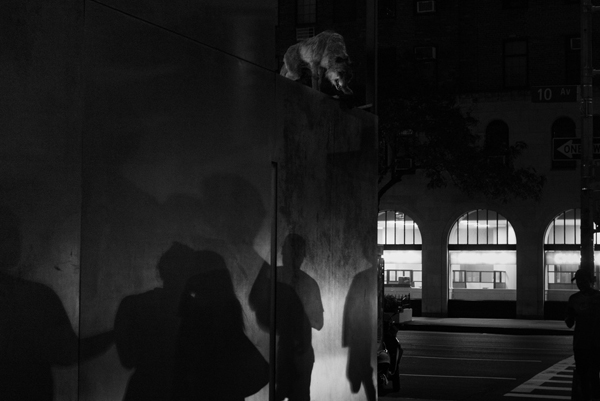 Some planes were flattened, while others receded deeply into space. Like two scenes spliced together in a film, the two halves make a greater whole, and push the viewer’s thoughts in new directions. You look and think you understand, then you pause and wonder if you do. Something about the distance, space and perspective seems off, so you stop and really look. Not all photographs have the power to make you slow down.

With dream mixing freely with reality, the images capture the odd juxtapositions of modern life: a door that seems to open onto a tiny, serried city, shadows of a hip crowd menaced by the high, barely seen figure of a wolf. Abstract and graphic, they are also strangely peaceful: an urban environment minus the hustle and bustle of rushing crowds. It is a show that draws the eye and holds the mind.

Adi Tarkay was born in Tel Aviv in 1964, and is the son of the painter Itzchak Tarkay (1935-2012). In a brief conversation at Fuchs Projects, he Googled his father’s work and pointed out that the elder Tarkay also flattened parts of scenes he portrayed. So there is a dialogue of sorts between father and son, each distinct in his own way.

Fuchs Projects is a contemporary gallery and studio in Brooklyn where Rafael Fuchs exhibits the work of local and foreign artists. It also functions as an informal photo salon where creativity of all stripes is celebrated and the talk free-flowing and open.

Story of Three Halves will be on view at Fuchs Projects, 56 Bogart Street in Bushwick, Brooklyn from October 14 – November 9, 2016. The gallery is catty corner to the rear exit of the Morgan Avenue stop on the L Train.