Irith Gubi is freelance and fine art photographer who lives and works in Israel. I met her recently when she visited New York, and was very impressed by a documentary series she did on the residents of Freiman House, a home for people with moderate retardation. Here are some of her images and thoughts about the project. 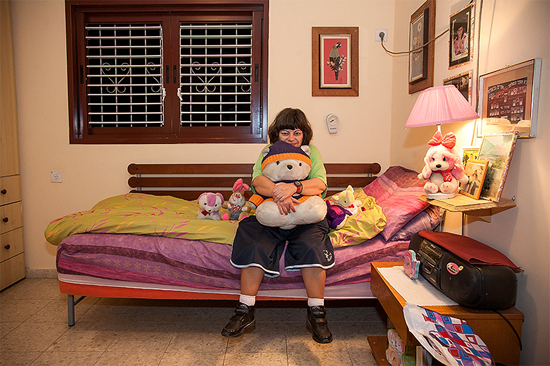 As a child I loved to draw, but on my eleventh birthday asked my parents for a camera and received a black plastic Agfa Instamatic. Though I loved taking apart and reassembling small appliances, the camera remained intact and I loved using it.

While my mother was the official photographer of family events, I used my new camera to explore my close surroundings. In high school, photography meant spending hours in the dark room. It was only after I started a family and took advanced courses, that I really began to understand and appreciate it.

I am curious by nature, interested in a many things, but most of all in the human experience. The more I was drawn to photography, the more I learned about the world around me, and also about myself. The camera makes it easier to approach people and deal with ambiguous and difficult situations, and also serves as a mirror reflecting myself. Looking at my work, I see issues that concern me, and sometimes solutions to unanswered questions. Photography is one of my strongest passions. 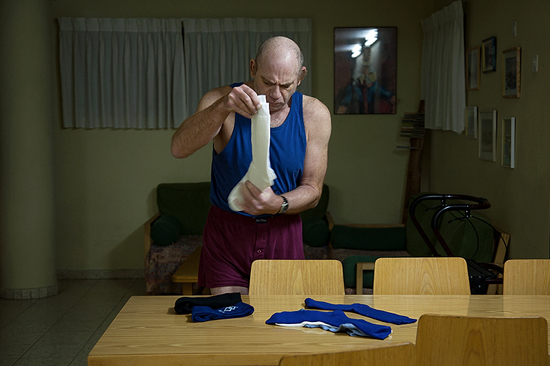 In photography school, as part of a social documentary course, I had an assignment to follow a person or a group, connect and get to know them gradually, then document their everyday life. I was fascinated by the images of the great social photographers and the considerable time and effort they invested in their projects. They were a great inspiration for me, and I was determined to find a special group of people that I could get to know.

In my city of Givataim, next to Tel Aviv, I used to see an unusual group of people passing through my quiet neighborhood. Their posture and body language suggested they were less aware of themselves than ordinary people, and some were very friendly and waved at passersby on the street. I was curious as to who they were and where they were going, and one morning found myself following a man from the group. I felt somewhat unethical, but was determined to satisfy my curiosity.

Yoram felt he was being followed, and increased his speed, and soon I was looking at myself from the outside–running down the street after a man I did not know. He went into the local grocery store, and I could hear his loud voice saying good morning to the shopkeeper. Then he came out, walking quickly, looking back at me until we reached the gate of a one-story building. 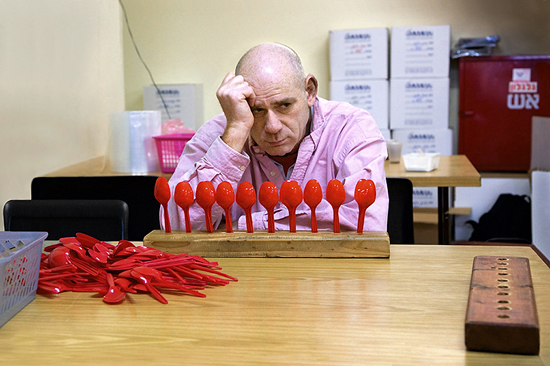 A sign said it was an employment center for people with disabilities. It took nearly three months for me to get all the approvals needed to join and photograph the group members at the employment center and the institution called Freiman House, where they lived and spent most of their time.

Freiman House residents suffer from mild to moderate mental retardation, and range in age from forty to to sixty-five. Most are independent and able to care for themselves to some extent; those who are less independent receive help and assistance from caregivers. They work at the employment center seven hours a day, five days a week and are engaged in a variety of easy crafts like binding cardboard folders, putting together small paper and wood decorations, counting teaspoons and putting them in bags. They are paid for their work. 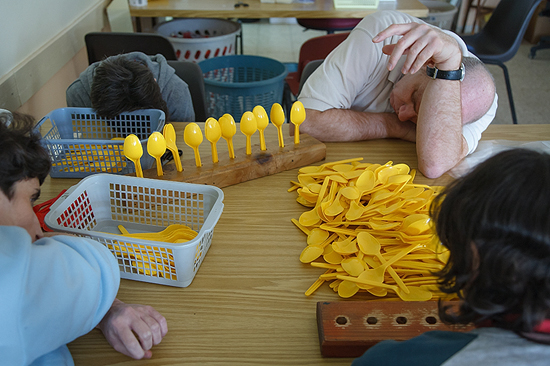 Following my teachers’ guidelines, I visited the institution for the first time without a camera, introducing myself, telling the residents about the purpose of my project. Some of them were friendly and quick to connect. They wanted to know my age, the name of my husband, how many children I had. Some were less verbal, and I was especially impressed by one woman who suffered from depression and rarely spoke. She had a huge amount of emotional energy, and would hug me several times during each visit. Her embrace was strong and intense, it took me a while to get used to this gesture. 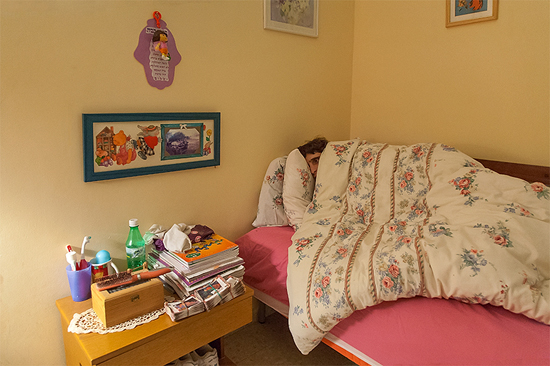 One man was very frustrated and troubled by the deterioration of his walking ability, and his speech was also very unclear. At the beginning of the project, he came up from behind, placed his hand strongly on my shoulder and terrified me. But I learned this was his way to communicate. I asked him not to repeat this, and he never did it again. Another woman who suffered from developmental disability was considered the most intelligent member of the group. On my first visit, she told me she did not belong there but had no other place to go. She was very clear in expressing who she liked and disliked, and though suspicious of me at first, developed trust as the project progressed. 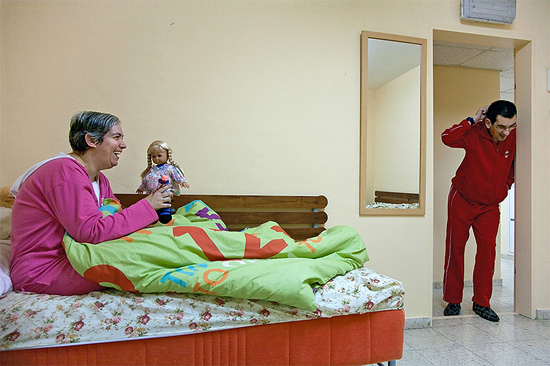 After a few visits, when I finally came with a camera, everyone was curious and asked me to take their picture. I agreed, though these were not the kind of images I wanted to take. I wanted them to be unaware of me, hoping that they would go about their usual tasks so I could see their true, authentic behavior. Although they knew how to “act” in front of the camera, it was their genuineness and true nature I was after. This is what fascinates me when I photograph people–the real, unstaged situations where a true moment or sentiment can reveal something deep in a person’s soul. 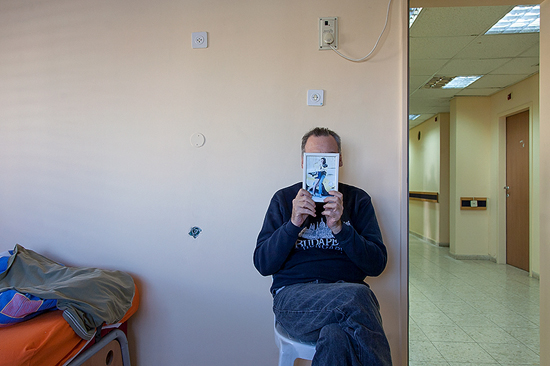 Winning their trust was dependent on the time I spent there, and after a few weeks they almost didn’t notice me or the camera, and I could avoid superficial visuals that would show them in a trite or undignified way. Whenever I came to photograph them, they seemed content, and I think  the photographic work made them feel important in their own eyes.

At the end of the course, I had a small body of work based on our short acquaintance, but felt it was not sufficient. I invited the group to the graduate exhibition at my school, and was moved to see their excitement when they saw themselves in pictures on the wall. 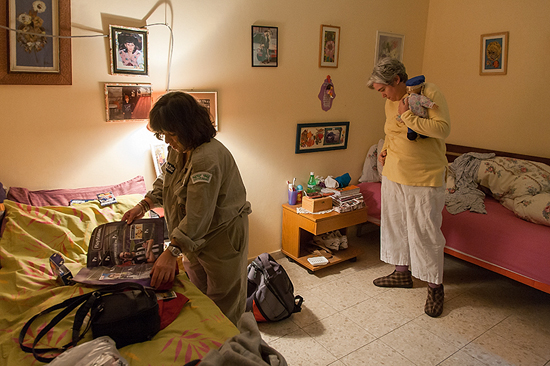 After graduation, I photographed Freiman House residents for more than a year and a half, resulting in an exhibition held at the town’s main gallery. The group members were also present at the opening, some accompanied by their families. Later the project earned an honorable mention at the PX3 photography competition in Paris.

The experience made me think about living in a place where others make all decisions for you about every aspect of your life. I also thought about the advantages of being in an environment where you get shelter and support without having to worry about your needs or reality beyond the walls. 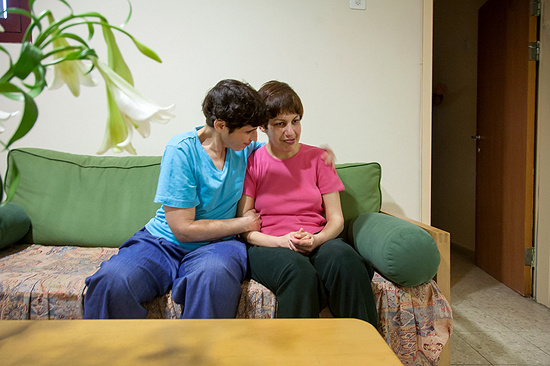 Most of all, I was deeply touched. The residents taught me without words, in their own unique language, to be more empathic toward others, to accept and embrace all people regardless of their capabilities and limitations. Getting to know these special people was a life lesson for me and helped me appreciate the beauty in each and every human being.

2 thoughts on “Lessons Through A Lens: Photographer Irith Gubi”