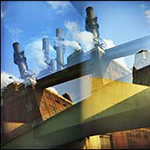 The World’s a Stage…

As you know, PWP began with an exhibition. In 1975, Breadth of Vision: Portfolios of Women Photographers opened at the Fashion Institute of Technology.  It was from that show that Professional Women Photographers emerged. Since that time, we have always had shows featuring our members’ work. Me Generation, Venus in the City, Eye Witness, Inside, and Objects of Affection (currently up at the Calumet Gallery) are a few that come to mind.  There was even an exchange show in 1990: Women Photographers: New York/Tokyo between the two “sister€ cities.  But this time the stage is a little bigger.

Because for the first time in our history, PWP is sponsoring an international call for entry open to women photographers around the world. For the prize winners and 20 jurors’ selections there will be an exhibition at Soho Photo Gallery in Tribeca and an exhibition online.  In addition, the Grand Prize winner will earn $600 and have their photograph appear on the cover of Imprints Magazine, and the First, Second and Third prize winners in each category will also receive cash awards and be featured in Imprints. And 37 additional Honorable Mentions will be featured in the online exhibition, which will run from October 15, 2010 through April 30, 2011.

The juried competition is open to PWP members, and the organizers encourage all members to submit their images in one of the four categories: People, Places, Nature and Abstract. The entry deadline is September 30th. For entry information and to register and submit images, please visit the 35th Anniversary International Women Only Photography Call for Entry page on our website.

In another first for PWP, the submission process has been outsourced to Smarterentry.com, a company with a long and proven track record in managing calls for arts organizations. This was done to handle the volume of submissions and to allow the jurors, Stephen Perloff, Editor of The Photo Review, and photographer Elinor Carucci, to view and judge images online from independent locations. The software-based system will collect each juror’s ratings independently and will rank the images, which will remain anonymous, by the jurors’ numerical ratings to ensure a completely objective judging process.

Because a cover of Imprints is part of the Grand Prize, we thought we would feature the work of the first two Imprints cover photographers.

In Their Own Words (with a few of ours) 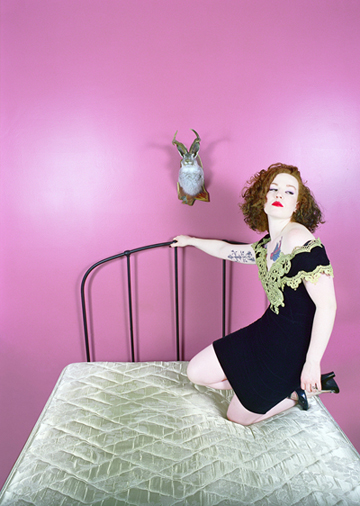 CK:  Is the photograph part of a series?

EN:  The series is Behind Closed Doors.

EN:  It was part of MFA project for Parsons. I was fascinated by the Burlesque scene in NYC and wanted to meet the women who participated in it.

CK:  Who is the woman and why did she interest you?

EN:  The woman’s names is Ginger Fringe and she interested me because she really embraced moving to NYC. I’m from here and I feel I never take advantage of the city around me. Within a short amount of time she had made friends and carved out a niche for herself.

CK:  Where is the space?

EN:  It was shot in her apartment in Greenpoint, Brooklyn.

CK:  Why is there no cover on the bed?

EN:  I think she just dropped off laundry that day.

EN:  I used a cheap pair of Savage Monolights. The room was so tiny it was hard to light.

CK:  Okay, one last question–what is that thing on the wall?!  Remember the movie Psycho?  Norman Bates was really into taxidermy….

EN:  That creepy thing is a jackalope! A “mythical” creature.

“This image Citizen’s Thermal Energy Plant…was shot in Indianapolis, Indiana in 2005. I was at the time a finalist for a public art project for the Airport Arts & Culture Program for the New Indianapolis Airport. I was in Indiana creating material for my proposal, which was for four 10′ x 96′ curved panoramas for the central Civic Plaza of the airport. I didn’t get the project, but I came home with probably my best photos to date.

I am always drawn to anything industrial, and I was fascinated to find what seemed to be a factory plopped down in the middle of an otherwise standard “prettified” city. All the smokestacks were spewing out steam, so to me it was very dramatic looking…by far the most interesting thing I had found.  It was up on a bit of a hill and trains were going in and out. I knew however that probably the commission that would be judging my work likely would see this site as an “eyesore”, so I didn’t include it in my submission. But I loved it. I got up early to shoot the plant in striking early morning light. Hope they never tear it down.

I shoot with a Holga. These are overlapping multiple exposures (I use about a half a scanned roll as one image).  I don’t know how they will turn out, which is part of the fun.”